This is an absolute stunner. Another peak you can gaze at while sipping on your coffee in Leknes. There’s a steep couloir straight down the middle (for another time, ski buddy required), skiing the ridge all the way down or skiing the shoulder which is what I opted for. A mouth-watering prospect. 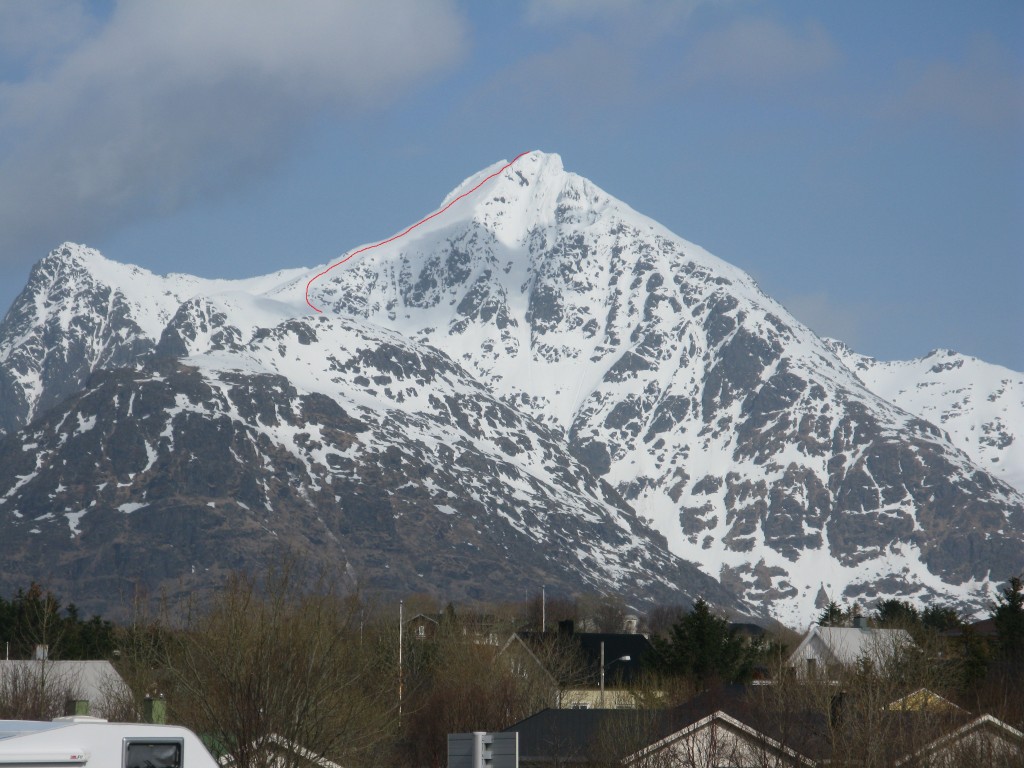 And unfortunately that is going to be how it remains until I’m next in Lofoten this time next year. For some reason I didn’t feel quite right about this one beforehand, some of it being irrational and due to the fact that I was going to solo this and some of it perhaps not.

The snow was again on the sparse side on the start of the climb up and again I didn’t use skins. 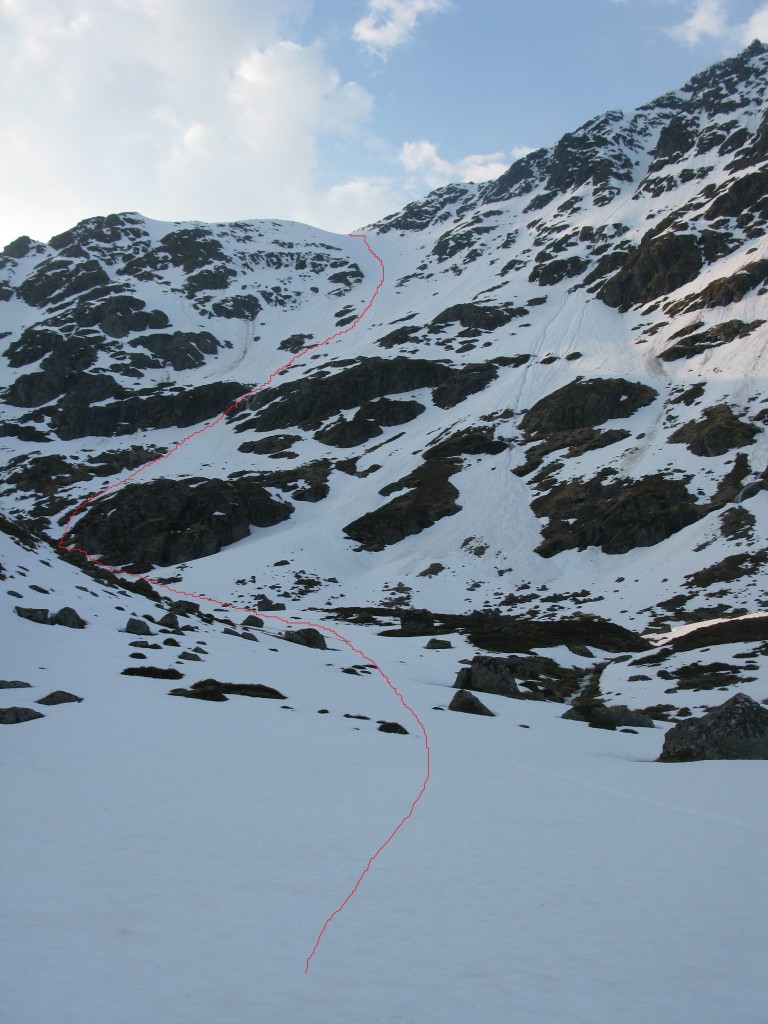 The intended climb up in red and the same ski down

There was a lot of water coming down the mountain in the form of streams and there were a few marked on the map for this mountain, so I didn’t think it was anything out of the ordinary other than, yes, the snow was melting. There was a fair bit of sluff and pin wheel activity too.

I took this one late in the day (16.30), reasoning that the south facing climb and ski would be softer and in the process of refreezing by the time I got to it. Which it was but the face was in a lot worse shape than I thought.

This face starts out mellow and gets progressively steeper. It’s 40 degrees (measured with inclinometer) half way up the face and still had a fair amount of steepness to go maxing out where you enter the south face from the shoulder (I’m guessing that must be 50 degrees). I didn’t get any further than half-way up the face. At that point, I was confronted with some big fissures in the snow pack, just waiting for more heat (or weight) to set them off. 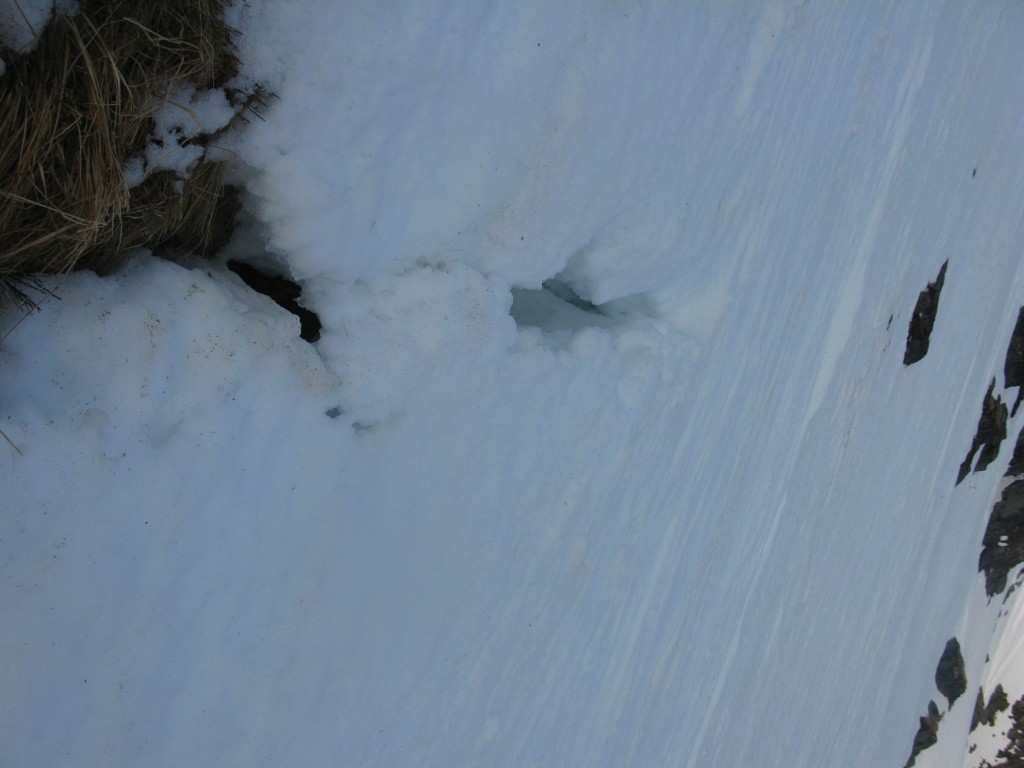 Nasty cracks in the snow pack 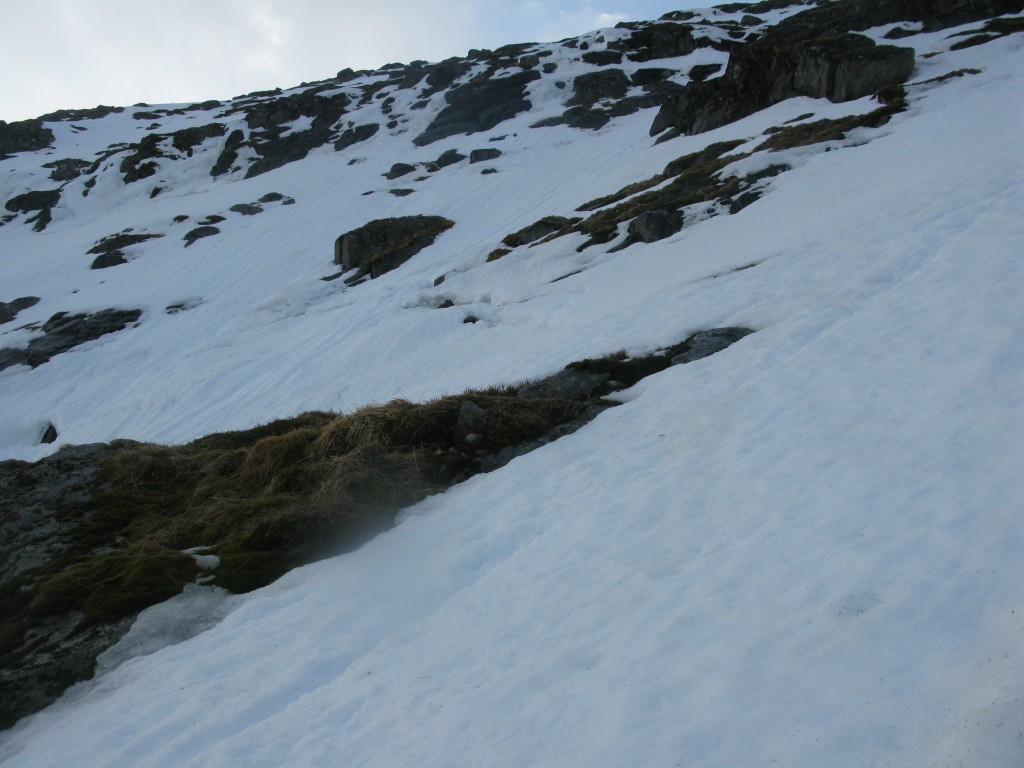 Not a nice feeling……. That was my cue to bin the route and head back down. So this will be another mountain for another day. This route has had its day for this season.

Temperatures are unseasonably warm for this time of year, not only in Lofoten but all over Norway, so take extra special care and enjoy the remainder of your season.

This entry was posted in Lofoten, Norway and tagged Leknes, Lofoten, Ristinden, Splitboarding. Bookmark the permalink.