The first post of the new season and it’s a bit of a wishy washy one to be honest. Failed attempts on a couple of peaks, bad conditions but a great three days away nonetheless.

I’ve decided to call a failed attempt on a peak a “reccy” instead, as that is what it really is. Checking things out and lessons learned for the next attempt. Anything to help lessen the frustration

The snow came late to Europe and Norway has been no exception. But when it came, it came in abundance. Or at least that’s what it looked like looking at the snow reports and from hearsay. Then Dagmar (a hurricane à la Norwegian) came along over Christmas with warm temps and rain.

That’s unfortunately how I found Isfjorden on the West Coast of Norway, just outside of Åndalsness, a 6.5 hrs drive from Oslo. A long drive through the usual, “hilly” mountains before you come to Trollveggen (highest vertical rock face in Europe) and the mountains get serious and beautiful. I wasn’t quite sure which face was Trollveggen but it turns out I was looking at the wrong one, just one door down from the face I should have been looking at which was shrouded in cloud. Another excuse to go back that way! 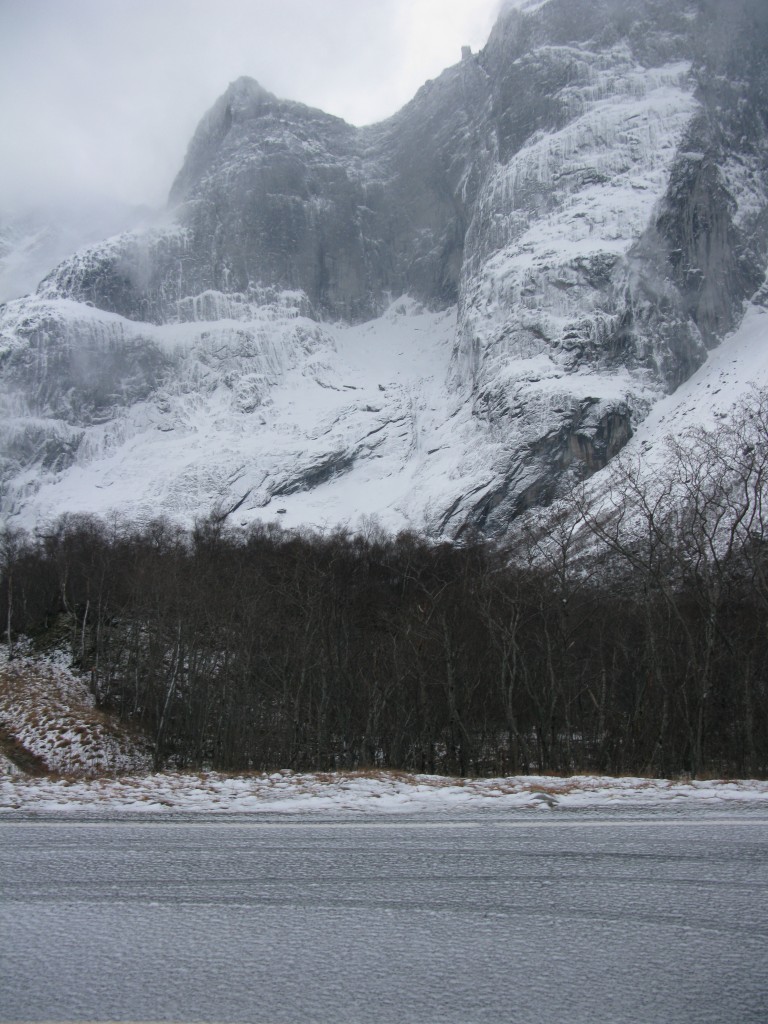 I didn’t really have a plan on going to Isfjorden which is always a bit of a mistake when time is short. I’d heard of the usual suspects like Kirketaket but that was it. So I thought I would try and do something on the first mountain I saw which had skiable lines and that was this one just above the town of Isfjorden: 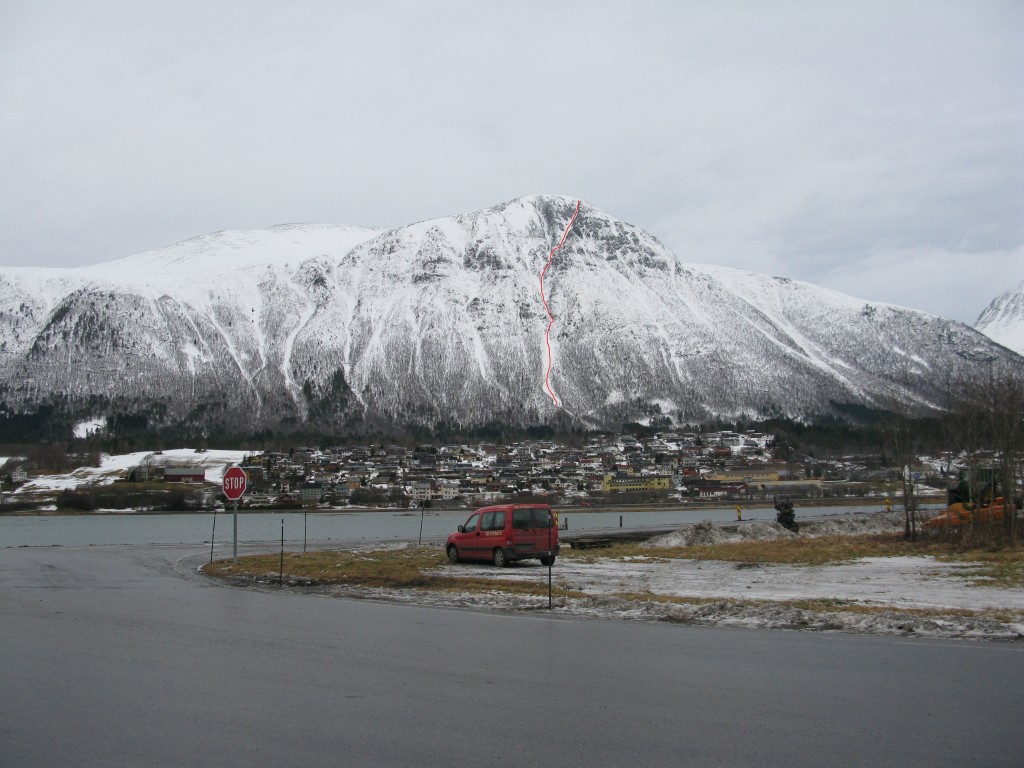 I wasn’t sure if this was a little ambitious for the first tour of the season and the second day on the board but you won’t know if you don’t try so off I went. The problem with touring at this time of year in Norway is the short days. What looked like a fairly straight forward approach turned out to be a shitty bush whack in shitty rain affected snow, so time and uncertainty got the better of me and I binned it before I got to the fan of the couloir.

I had hoped to spend all three days in Isfjorden getting to know the area but it looked like it had rained pretty much to the top of the mountains before I arrived and more rain was coming the next day ( 29th Dec) and a lot more the next day, so off I went to pastures new, hoping to wrestle a bit of snowboarding out of the few days I had.

Waking up to the pitter patter of rain on my tent the next morning, my decision was confirmed and I headed to Jotunheimen with a pit stop in Bjorli for a couple of hours of piste skiing (a really small resort with a couple of runs).

It turns out they had just closed the road (N55) for winter the day before I got there which meant I wouldn’t be able to get into the area. Things were conspiring against me. I could get some way up the road though to the road that turns off to Leirvassbu and Loftet mountain. 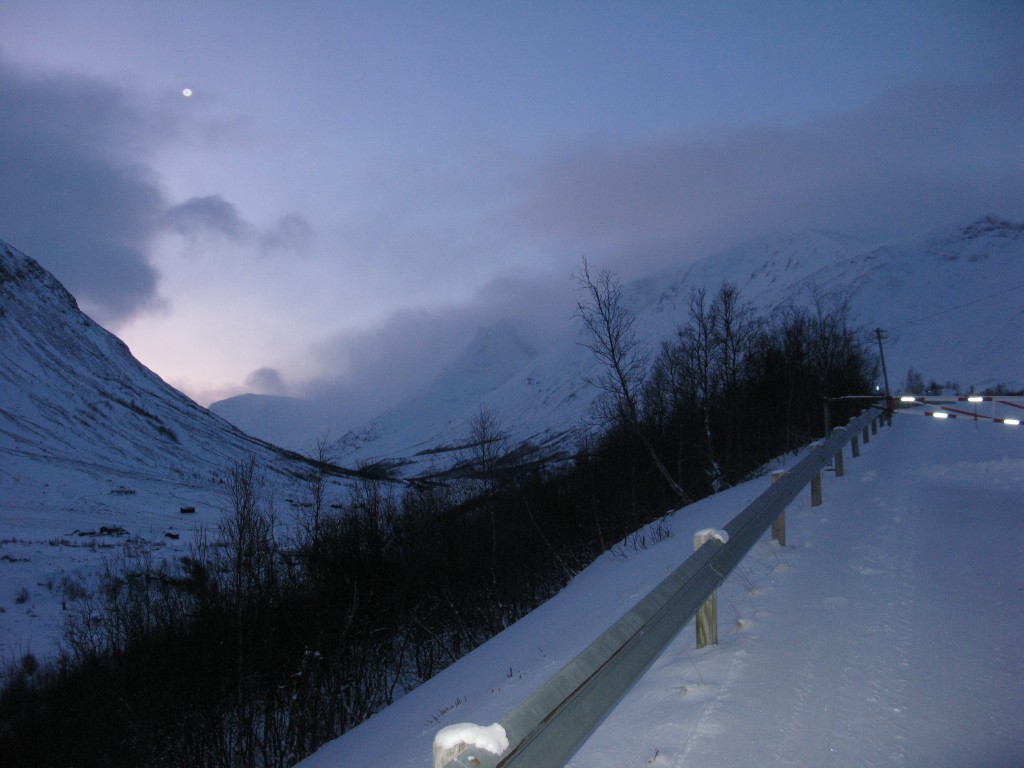 Looking towards Skagsnebb at 9am

I’d had my eye on a little something in Leirdalen which again might present me with a few timing issues due to the short day light hours, as indeed it did. I took the wrong approach which didn’t help and lost a lot of time but at least found the best way for next time. A failed attempt but a successful reccie

Conditions here too were not the best. It looked like it had rained pretty high up (at least 1500m. As high as I got.) and refroze. It was boiler plate with a 10cm light and fluffy layer of powder on top and deep pockets of accumulated snow if you were lucky enough to chance upon them. I did on a few occasions and it was blower powder!

There was a big avalanche run out too which I can only imagine was from warmer temps and rain. The debris was boulder size and much more like the warm, wet slides you see at the end of the season. Something to bear in mind as this layer forms the foundation for other snow layers later in the season. 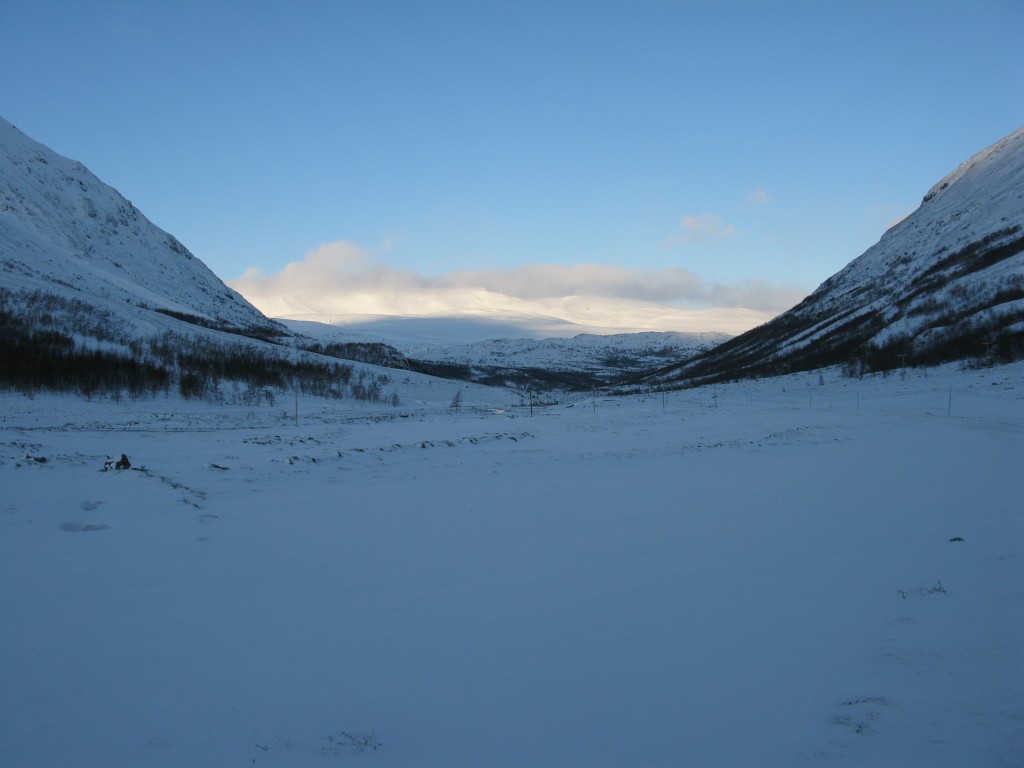 Looking north in Leirdalen as the light fades (3pm)

So, on paper a pretty unsuccessful trip. But then what was I expecting having no knowledge of Isfjorden and just generally challenging conditions. Off paper (if you can say that), it was a fantastic 3 days away with me, my car, my splitboard and my tent. A fantastic sense of freedom that I haven’t felt for a long time which has got me well up for the new season!

And things to look forward to: Lofoten, Chamonix and Pakistan!