Finally…..! My last proper post was over two months ago. And no…it wasn’t because I’ve been so busy skiing that I just haven’t had time. I haven’t really been skiing. Well, there has been the odd bit of resort skiing but nothing really interesting enough to write about.

The start of the season in the interior of Norway has been pretty tragic. The odd powder day in Hemsedal, touring around Hemsedal on a 50cm base and skinning up the local 300m slope in Oslo (Tryvann). All a far cry from my seasonnaire days where mountains and routes were a plenty and just outside the door!

Needless to say, I was pretty excited at the prospect of going to the Dolomites in Italy for a couple of days. Only two days skiing but definitely better than nothing. My first time there and I don’t know why it has taken so long. For someone who likes couloirs, this place is a mecca. And just stunning mountains to boot.

It hasn’t snowed here since Christmas but just a day before we arrived, we got a nice covering of around 40cm and spent the first day with some locals, finding our bearings and skiing the slack country on Marmolada and getting a feel for how the snow was settling.

All good and day two we took the lift up from Passo Pordoi to check out some lines. This lift is in the town of Canazei and gives you access to so many off pistes runs. I don’t think I have ever been on one lift that opens up so much terrain and variation with so little effort. We were spoilt for choice and changed our minds more than once on the way up and when we got there! But we plumped for Canale Col Alton, (canale being Italian for couloir). 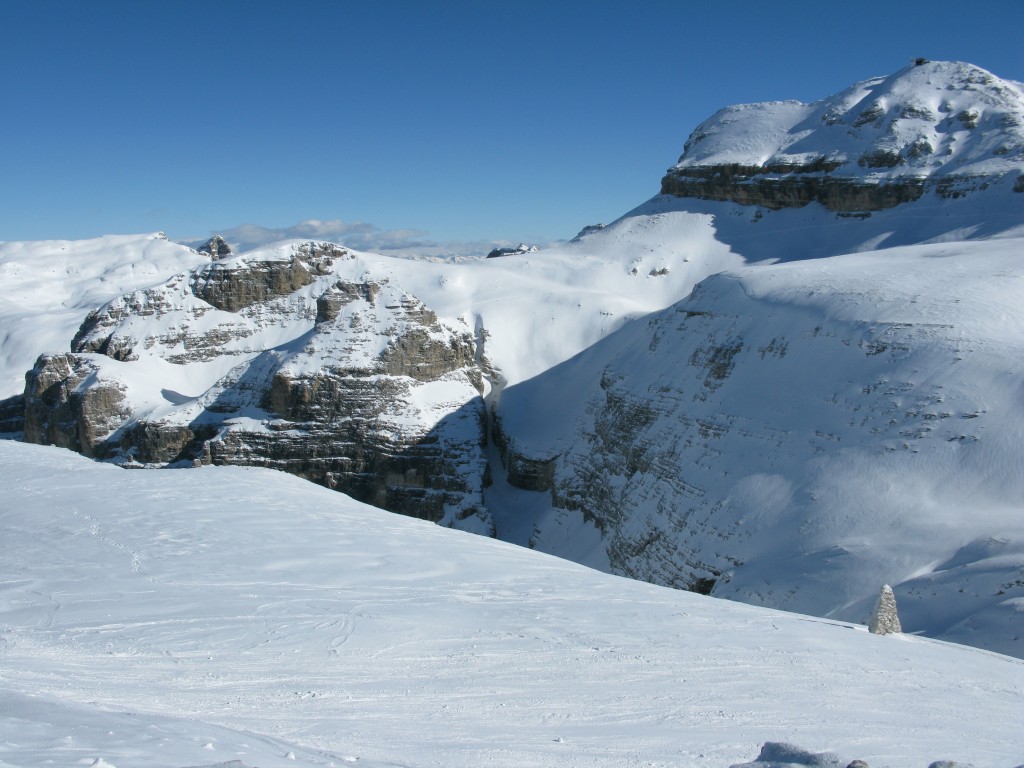 Defintely a good warm up run and the steepest thing I’ve skied all season (which isn’t saying much all things considered). It’s around 40 degrees with a few sections of 45 degrees and south west facing. There had been two turns in it before we got to it (at least we knew it went ;)). It takes about 30mins to get to once you get out of the lift on the summit of Sass Pordoi and very easy to spot as long as you head for Piz Boe. Bit of a role-over in the entrance which always heightens the suspense. 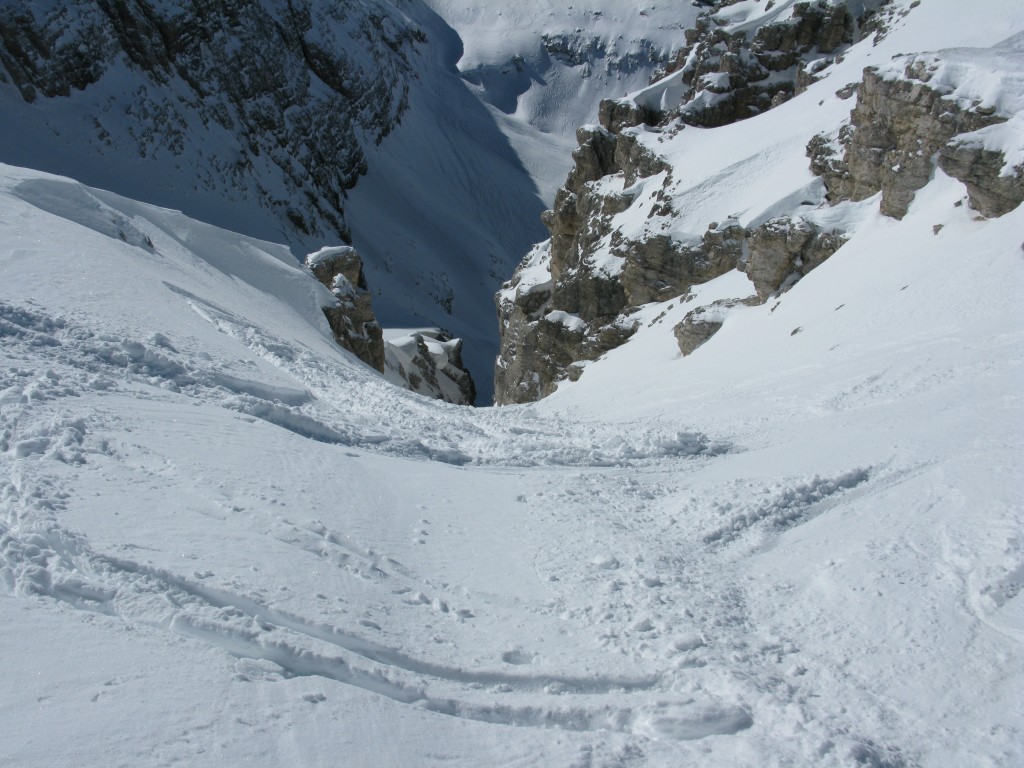 But an absolute stunner of a couloir. Perfect blue skies, good snow and a great line. Not much else you could ask for. 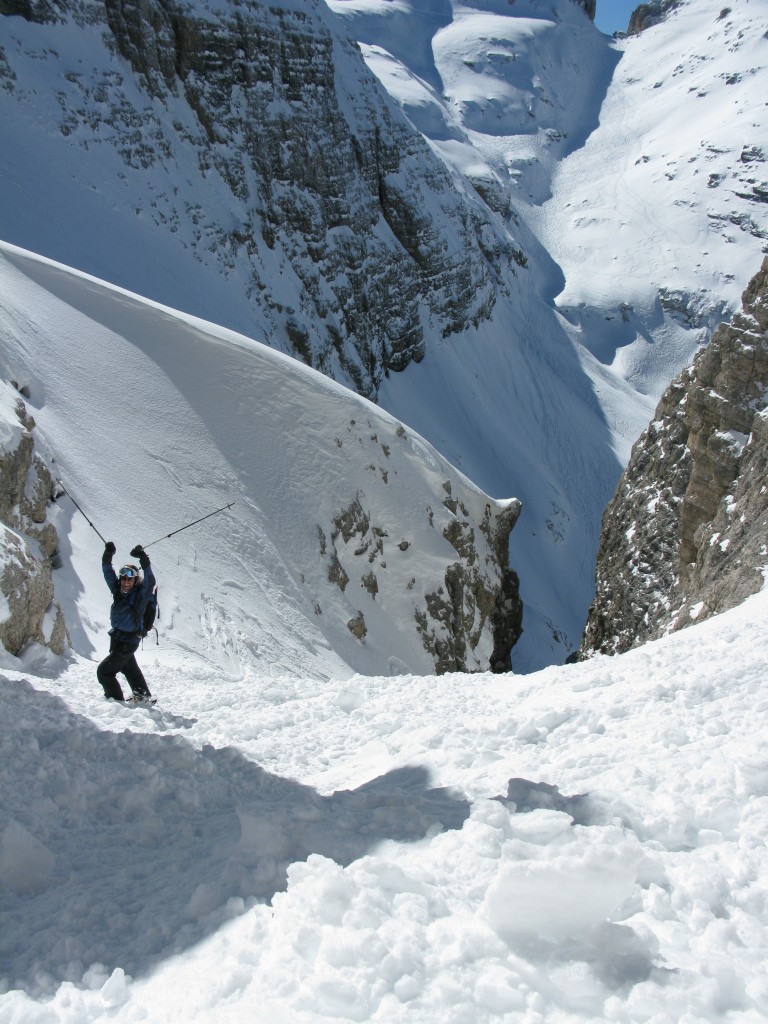 Sigurd in the upper section of the couloir 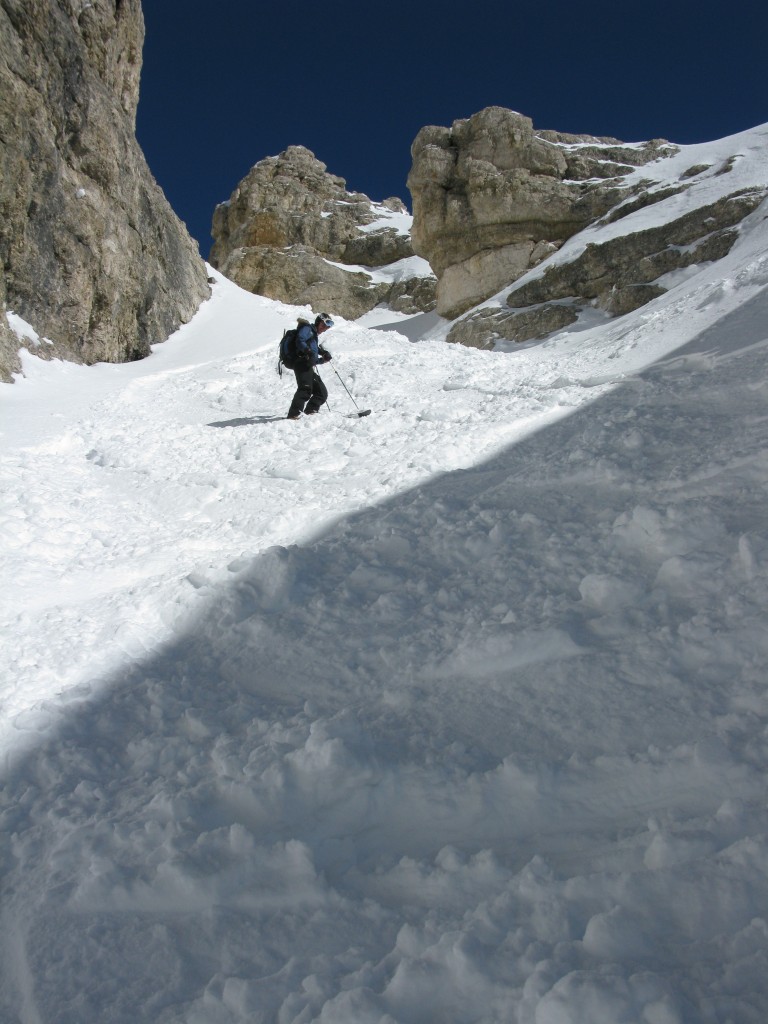 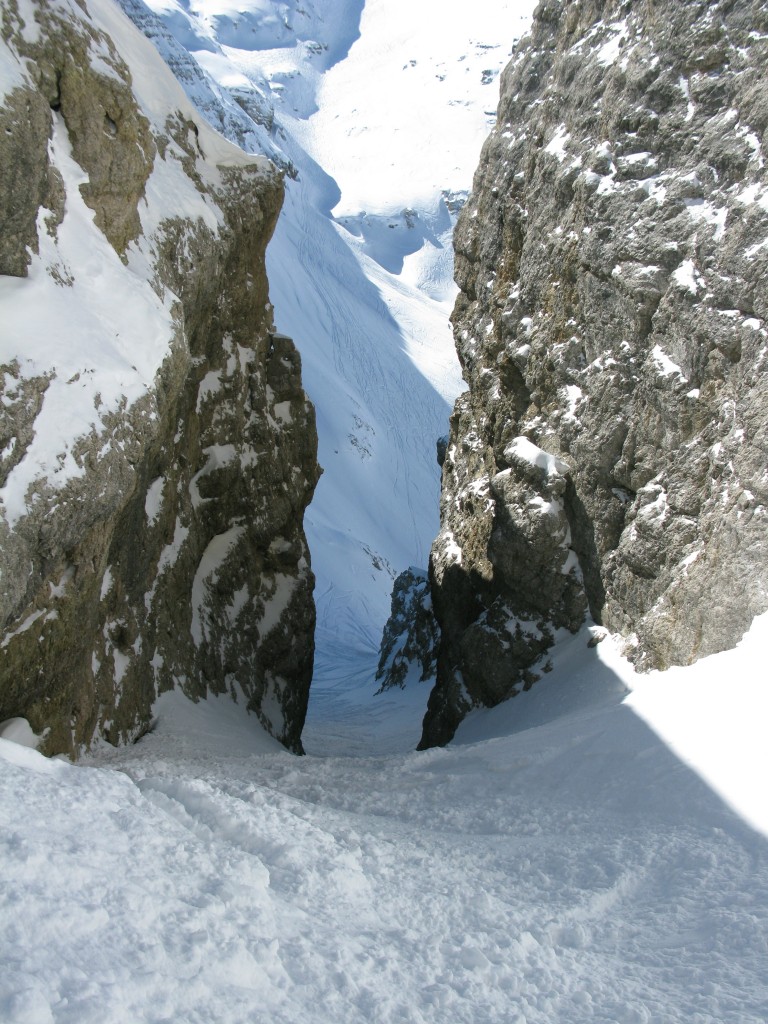 Exit of the couloir

Once you’re out of the couloir, you end up in Val Lasties which opens up nicely for a bit of charging. 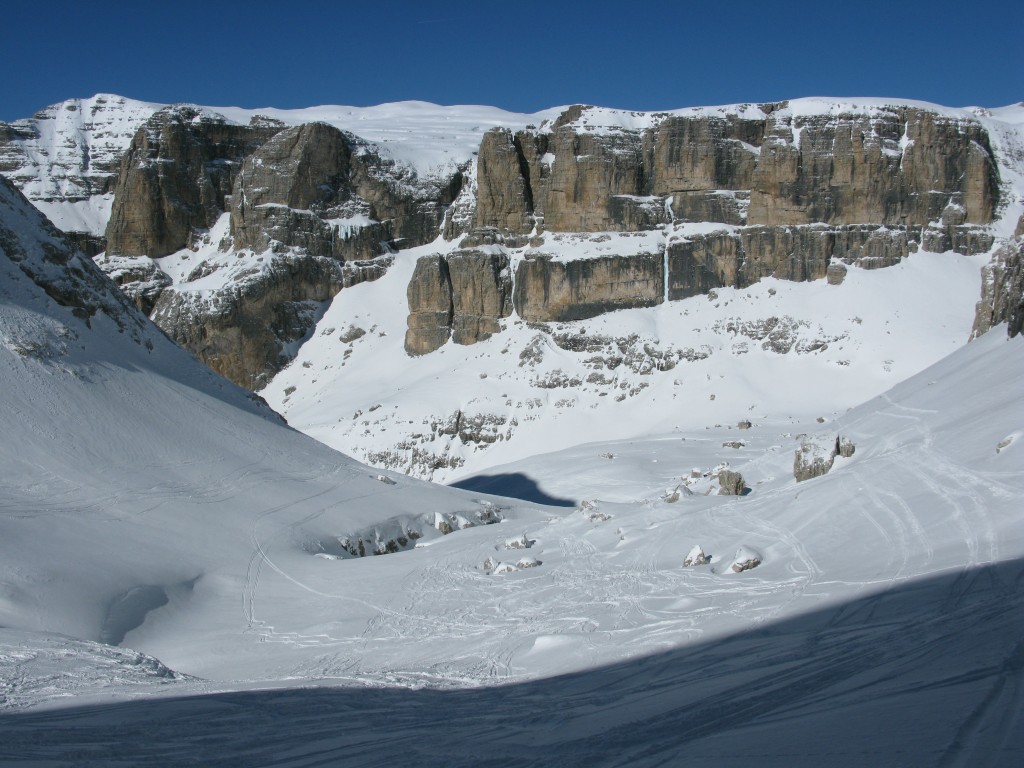 Out of the couloir and entering Val Lasties

Once you’re into the valley it’s just a question of following the fall line down to the left (as in picture above) for another 700 vertical metres of skiing (my guesstimate). Val Lasties is very accessible and consequently pretty popular as far as routes go in this area. So it was no surprise to find a very icy mogul field on the way down (this is a little couloir right next to the north face of Sass Pordoi) which led to some good old bush whaking before we came out at Pian Schiavaneis (an outcrop of buildings next to a road). The good thing about this run is that you can get right back to the resort without having to hitch. When you get to Pian Schiavaneis, there’s a trail which runs alongside the road and then crosses the road further down and you’re back at the resort. Nice! One word of warning….. get the superski pass. We got the Arabba-Marmolada pass and it doesn’t cover the two lifts you need to get back to Passo Pordoi. EUR 6 for a single up. No big deal but still…….

And another good tip… buy the book “Freeride in Dolomite” by Francesco Tremolada. Indispensible if you come to ski here.