Is this going to be the last post of the season….. I hope not but by the looks of the temperatures of late, the snow is bound to be disappearing. Oslo is hot, hot, hot. In fact, the whole of Norway is hot, hot, hot. Temperatures near the Lyngen Alps last week were in the 20′s. Well, I’d better make the most of it!

Day 2 of our little trip out to the Hurrungane and after eying up a few possibilities, we decided to ski Store Ringstind. According to some of the guide books, this is one of Norway’s most classic ski tours. I cannot really argue against that, not having done much skiing here but it was certainly a great tour if that comes close to classic. And it really is a ski tour in the true sense of the word with a short boot pack at the start of the climb but otherwise skins are on all the way. 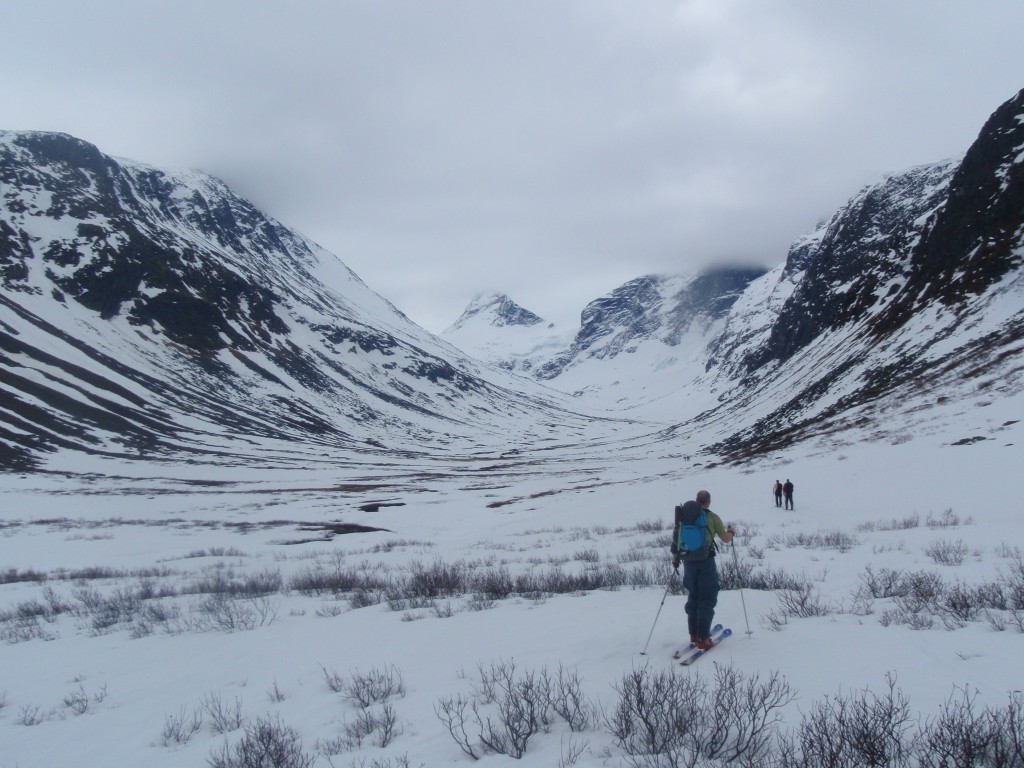 Lars on the start of the long approach.....Store Ringstind centre right

It’s pretty long approach of around 4km (you ski out the way you came in) with little altitude gain. I think it was around 200 to 300m before you start to climb proper and the vertical gain for the trip was 1300m. We did it in around 5.5hrs including breaks, faffing and everything else. Unfortunately the weather hadn’t improved much from the previous day but sun was forecast…..and it promptly came around 11.00. 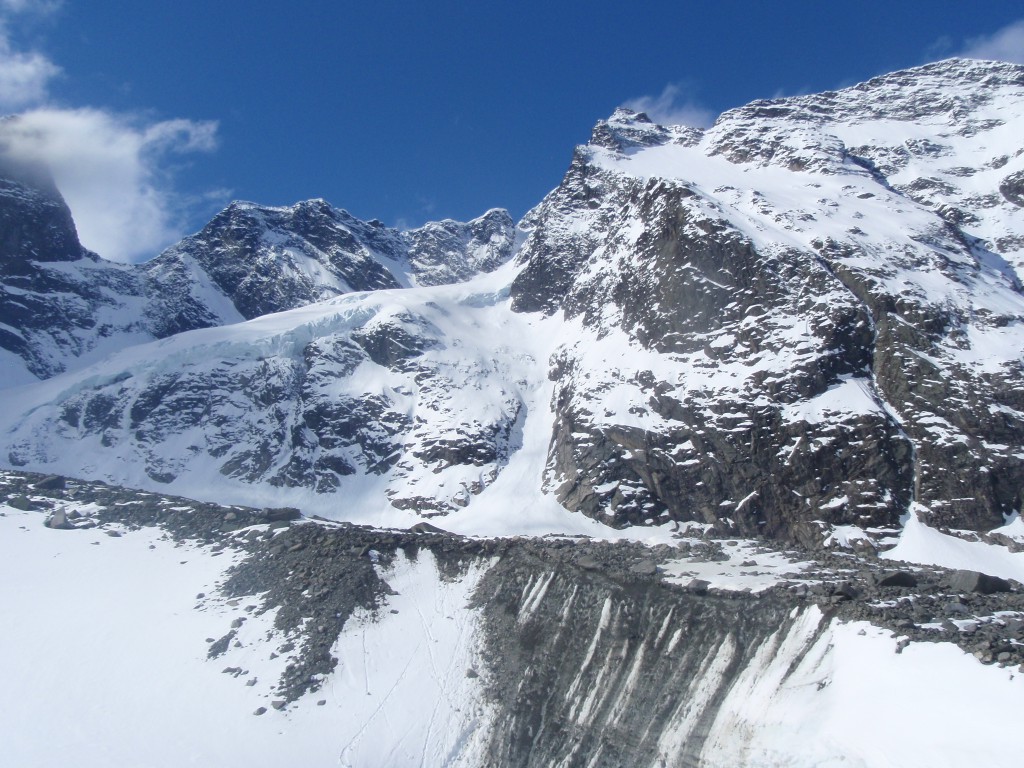 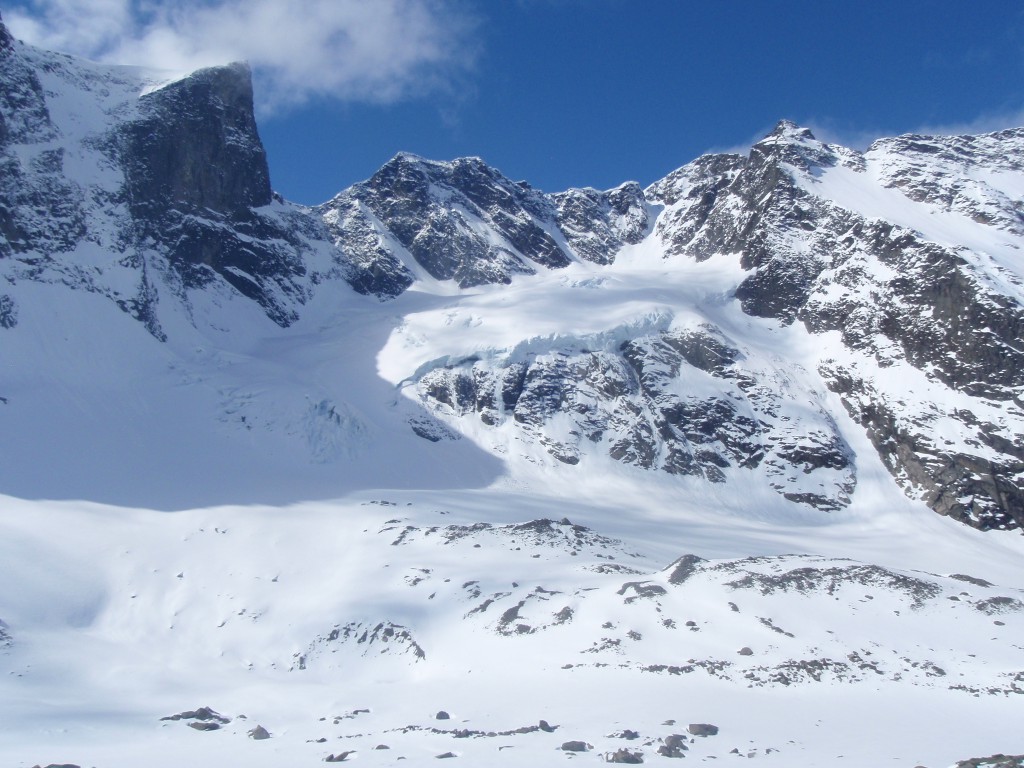 Taken approach right (Store Soleitind side) at start of climb/bootpack

I was really impressed with the terrain around here. From the road around this area, you can be forgiven for thinking it’s all rolling and quite tame but it’s all in there. You just have to get in there. It was as good as anything I’ve seen. There is a 1000m 50 degree couloir which is on climber’s right on the approach. I thought I was in Chamonix there for a second. Oh, the delights!! It’s really exciting to realise that this kind of terrain is only a car drive away!! Oh yeah, baby! ;).

We took a different bootpack up to everyone else (oh and there were quite a lot of people. Seems the Norwegians like this tour a lot!) but we didn’t really gain much time for our difference. This is used as the descent exit for most skiers. 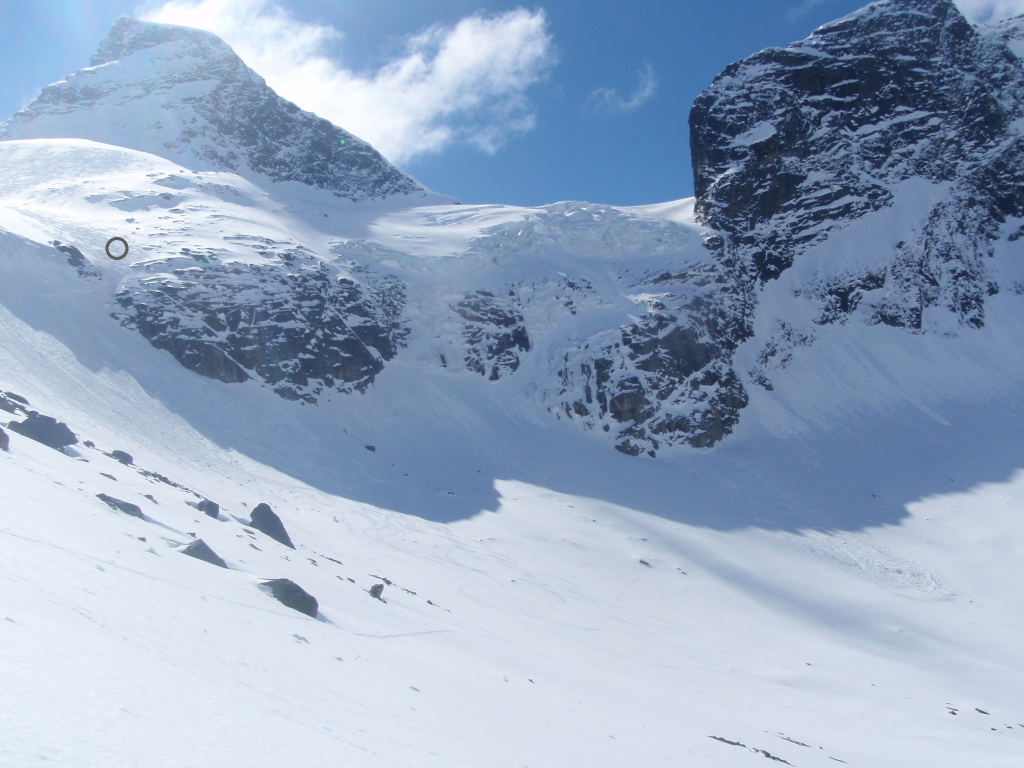 We bootpacked up climber's far left 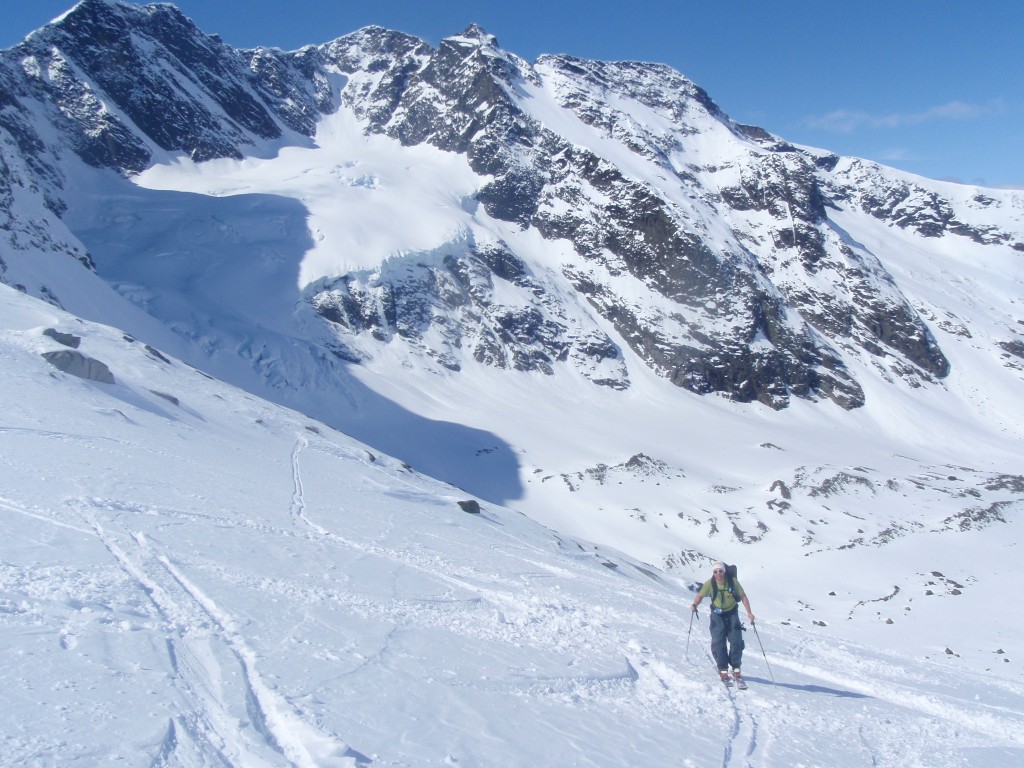 Lars skinning up after the bootpack 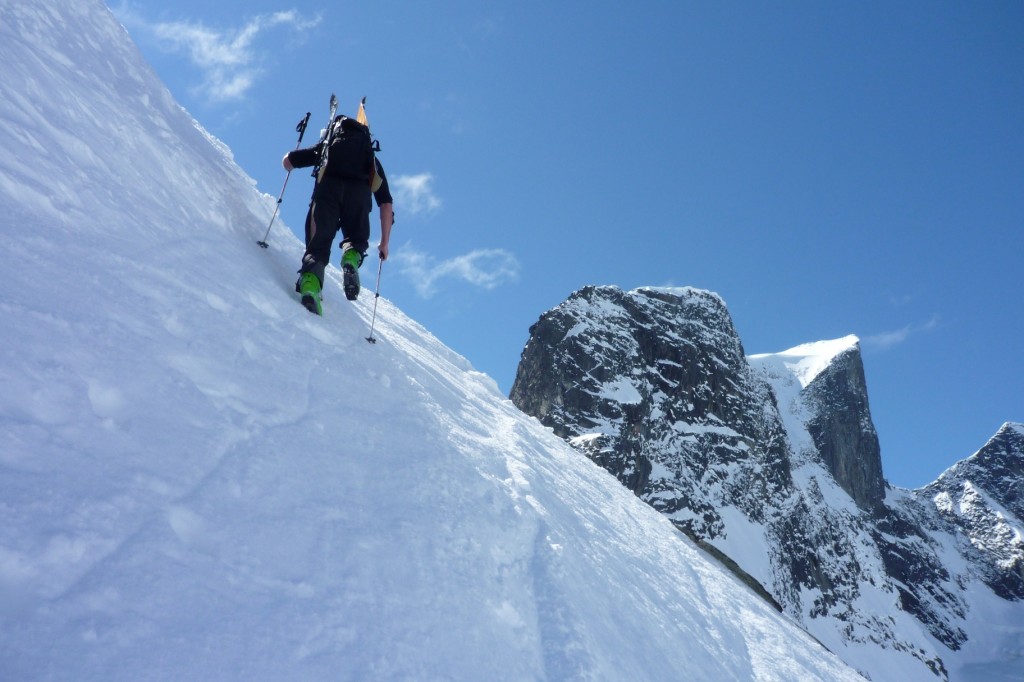 The actual face of Store Ringstind is like a giant wedge, sheer faces on three sides and then this perfect 35 degree snow clad slope. Whoever came up with the idea of earth must have been thinking about skiers when they made this face. Perfect! There are a few large crevasses in it but they are large.. and therefore easily avoidable. We didn’t have glacier travel gear (some did and maybe it would be sensible to). 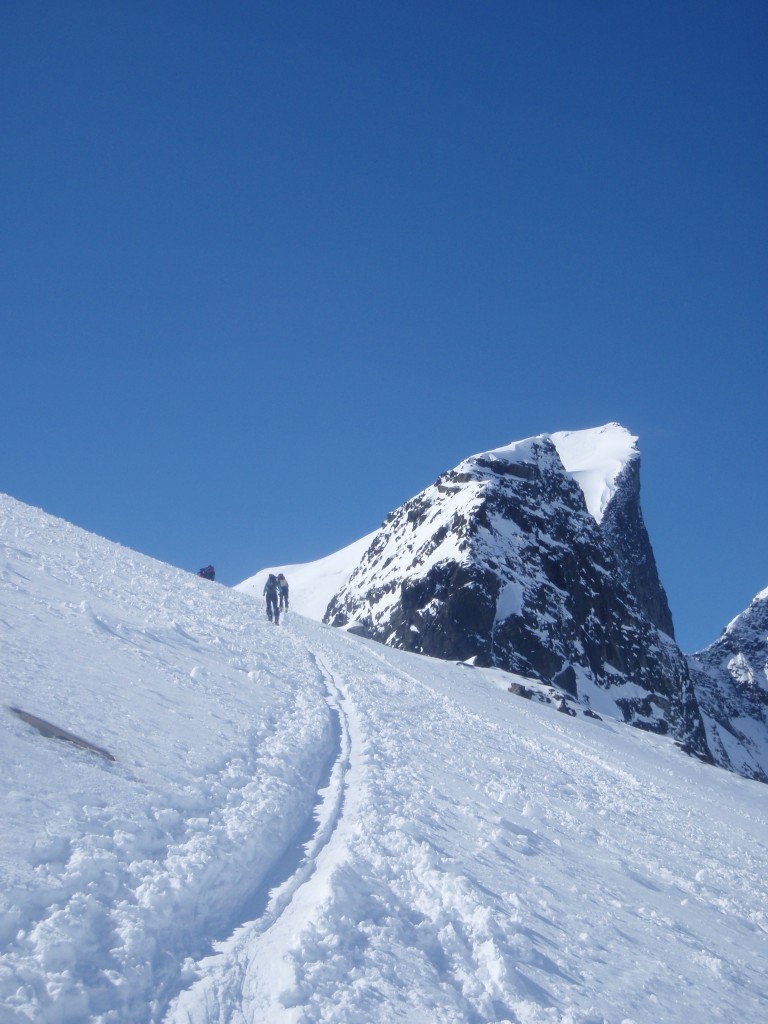 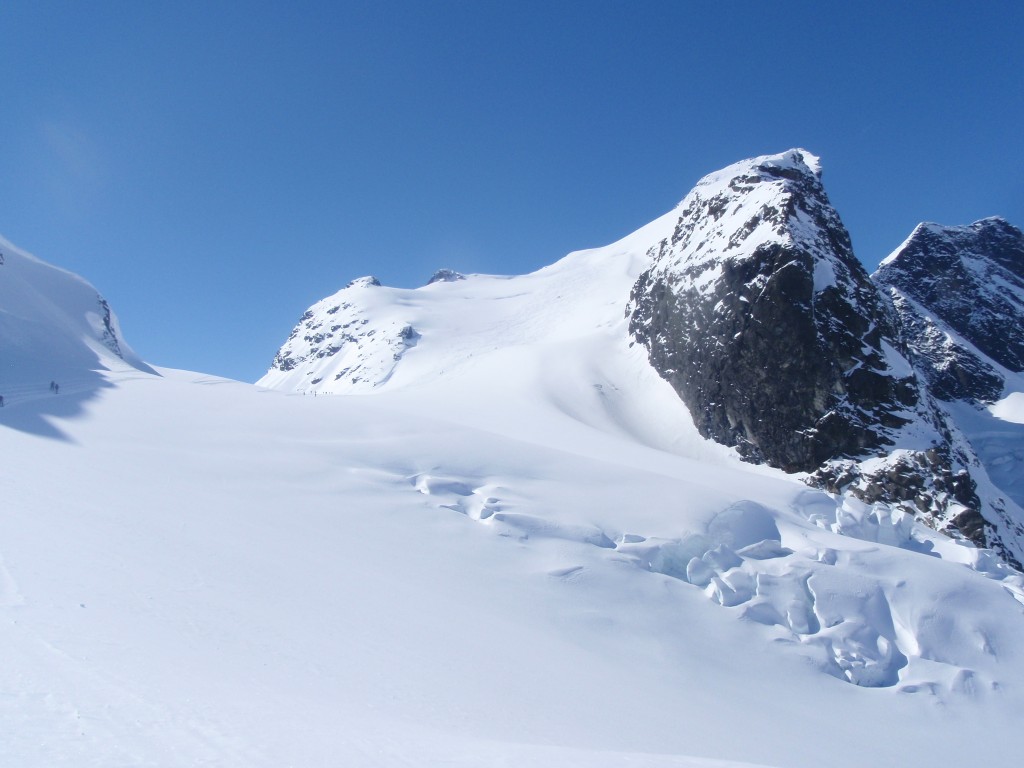 The very top of the summit steepens to low 40 degrees but it’s not very long before it becomes less steep. Unfortunately, just before we reached the summit, the clouds and wind came in and it was a complete whiteout, so no nice views for us. 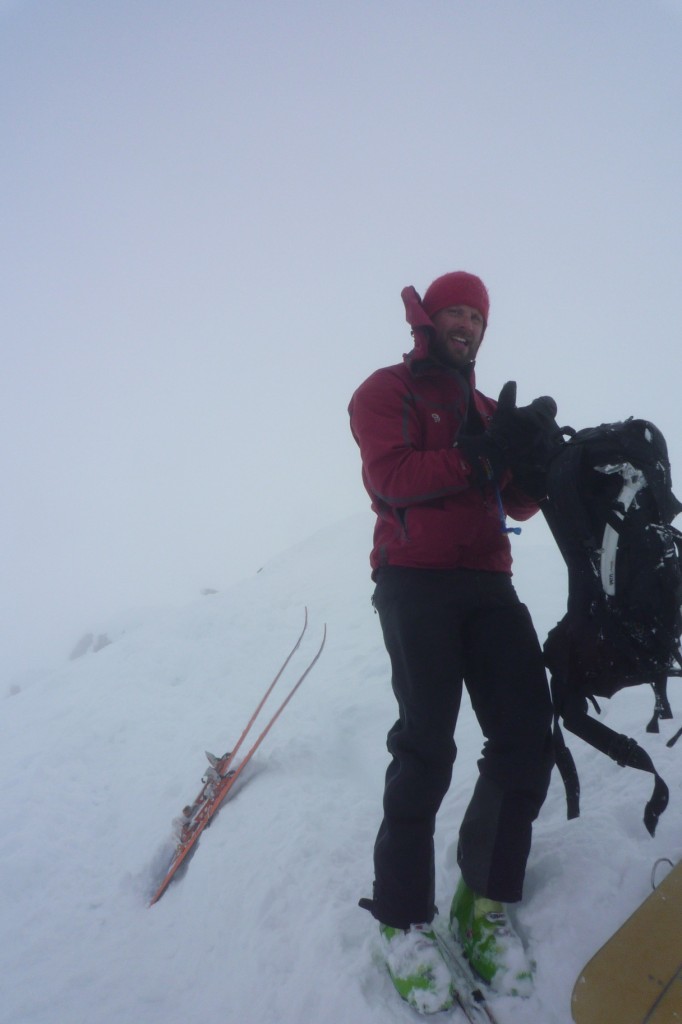 And not very many nice pictures of us on the way down. I got cold hands and didn’t want to hang around, so just shot off down the face…400m of great cruisy and fast turns and then…….glue. Not so much fun that bit. Everyone was getting caught out. It changed instantly from spring corn to glue and threw everyone. It got better again lower down though. 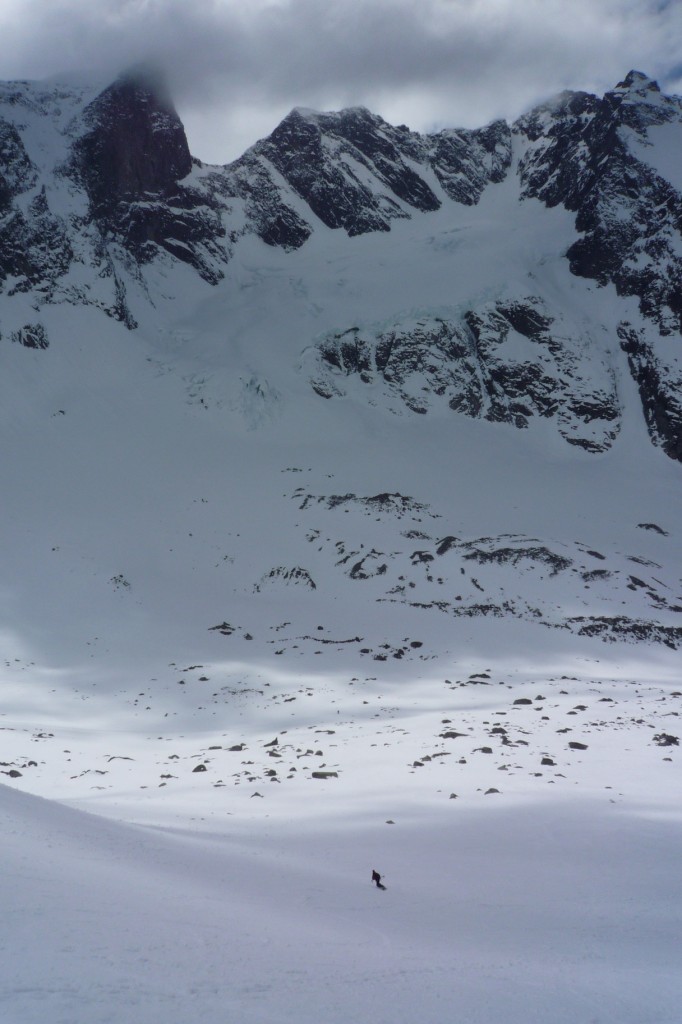 And then the long ride out back to the car. Board back into ski mode to practice my telemark turns.. or lack there of. You can pole out pretty much the whole way with a little ascent at the end back down to the car.

A great tour and surely one of Norway’s classics……..