The weather has been playing havoc with touring plans since I arrived in Chamonix 10 days ago. I don’t think I have ever wanted it to not snow so much. The normal stable weather at this time of year has been non-existent, with the odd blue bird day peering through masses of grey and snow; nowhere near conducive to safe and stable conditions. The few attempts to get out there have been thwarted by chest high snow on the climbs, literally swimming in snow.

So, when I partnered up with my good old mate, Nick, for a foray in the Argentiere basin, we were pretty accepting of whatever the outcome would be. Good times in the mountains with good friends is what it’s all about in the end anyway and I couldn’t have been out with a better touring buddy. Nick initiated me into the finer points of ski mountaineering not so many moons ago. Great person to have in the mountains. 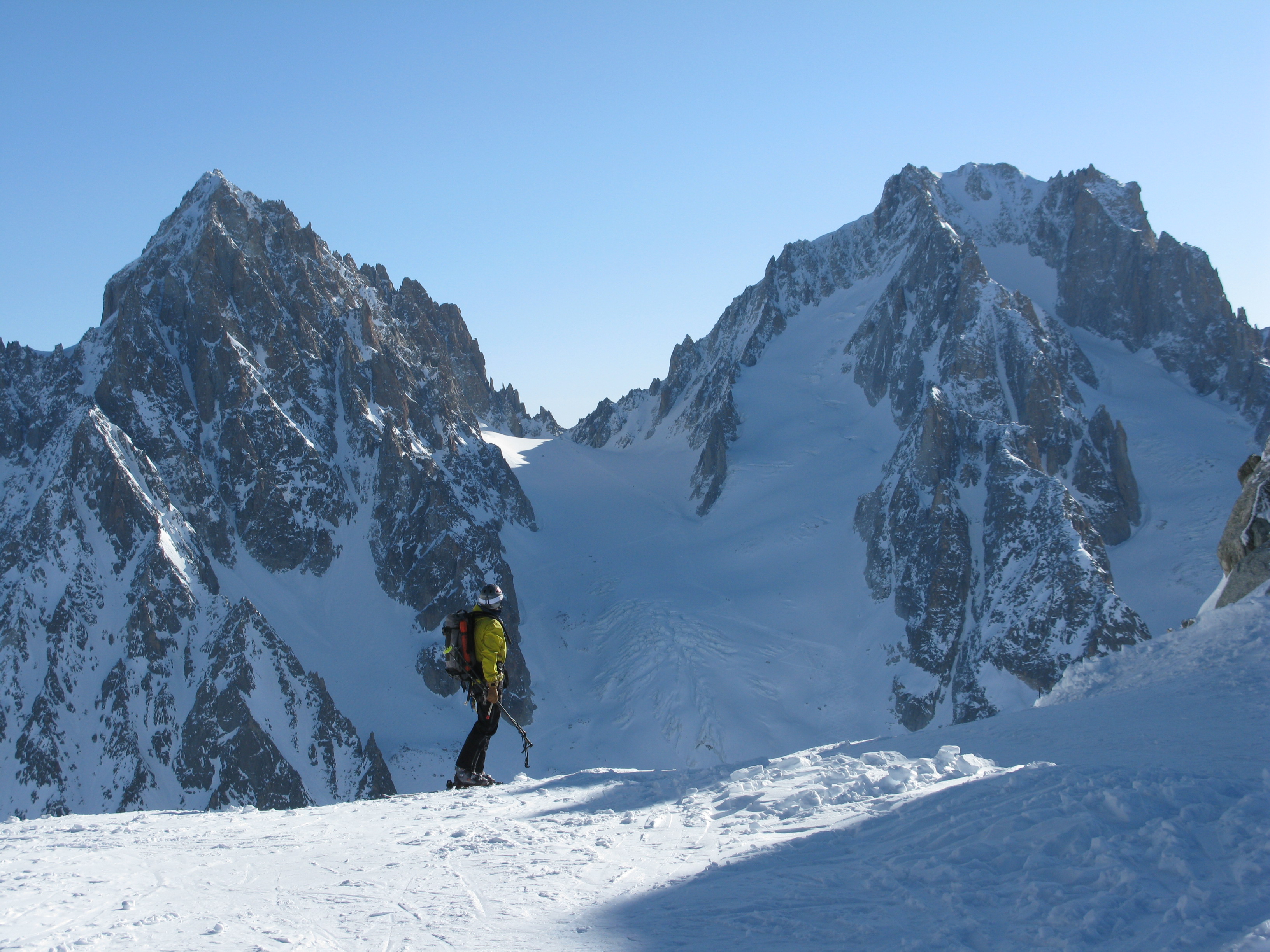 We managed to get first lifts Chamonix style and headed towards the end of the basin, one objective in mind: the Col des Courtes. 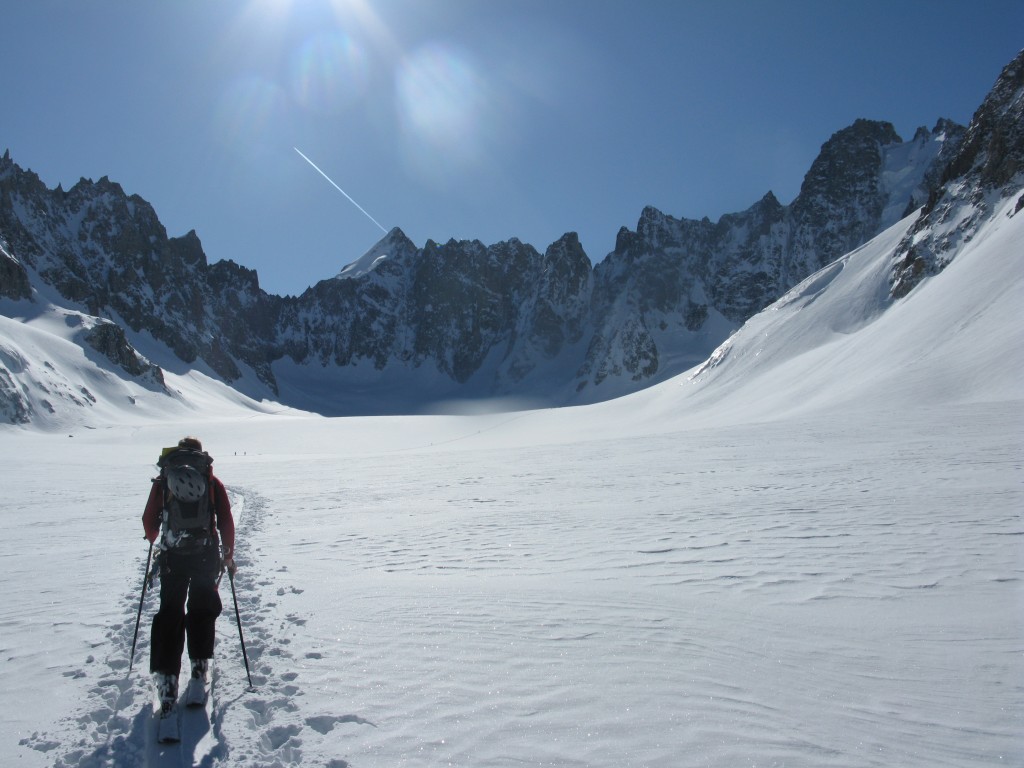 Heading towards the back of the Argentiere Basin: Mont Dolent centre, Aiguille de Triolet far right

It turned out to be such a warm day and the mountains were talking to anyone who would listen. Frequent point releases from rock warming but nothing big and not a single slab avalanche which would have sent us home with our tail between our legs. So we sat out the warmest part of the day and waited for things to calm down. The avalanche activity earlier in the day had sent everyone else packing, so there was not going to be any help with the boot pack but today was a good day to be on northerly aspects.

We decided on Col des Cristaux in the end, the face next to Col des Courtes as it seemed a more realistic proposition given the time we had waited and the fact that it had been more active earlier in the day and hence safer. A 600m shot at around 48 to 50 degrees (I checked it with my inclinometer).

We set off around 13.30 and were at the bergschrund for 14.00 which was easily passable. We managed to skin up 200m of the face before starting a long boot pack up on the avalanche runnel looker’s right of the face, nice at times but a few episodes of wallowing in snow which lost us time. 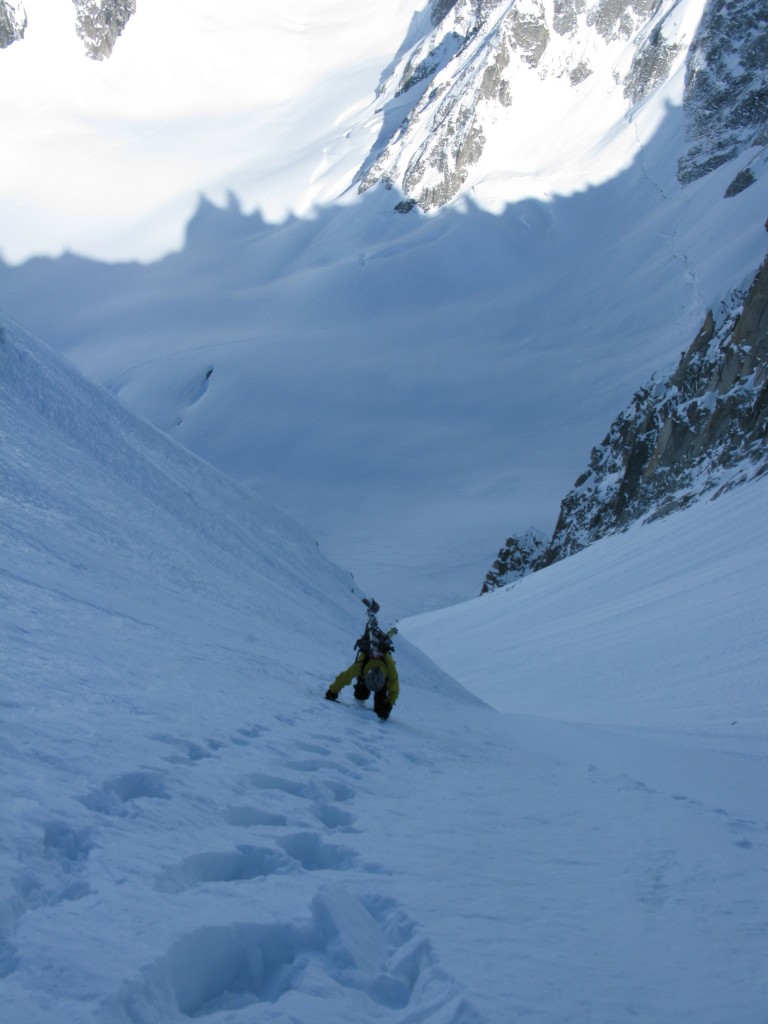 Nick on the way up 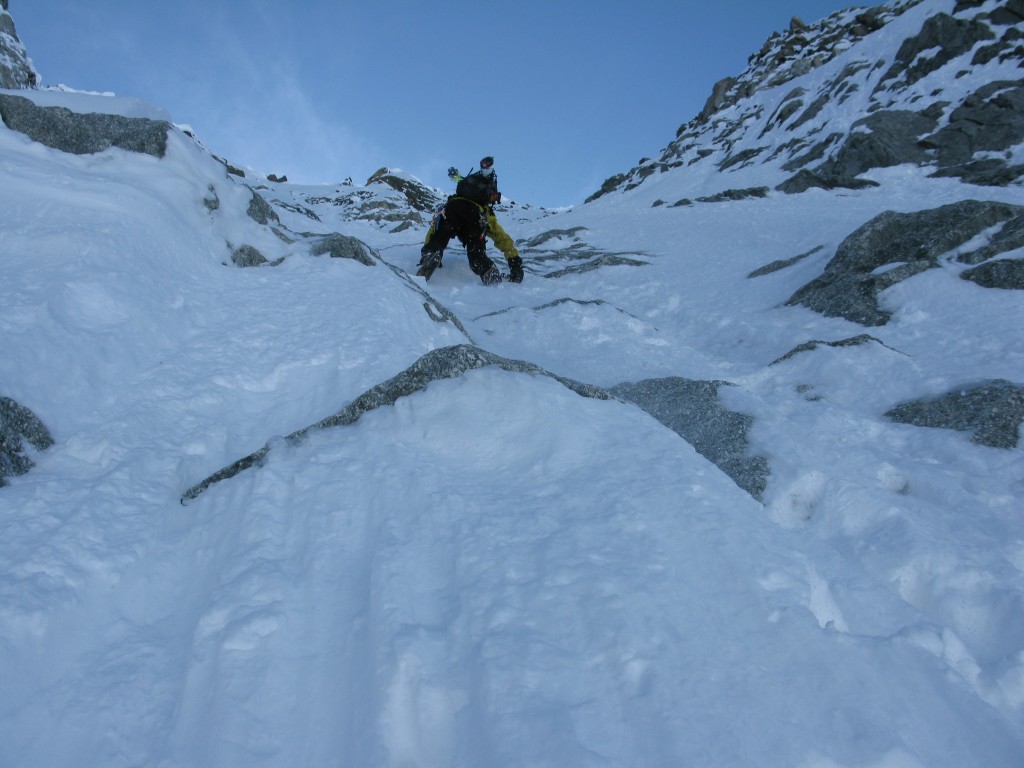 We were on the summit at 18.00 or should I say 10m from it. It took another hour to finally get on the ridge with the rock-affected, faceted snow but the view was worth it!

We got ready to head down, the first section was pretty steep (around 60 degrees with hidden rock), so we took it pretty easy on this section. 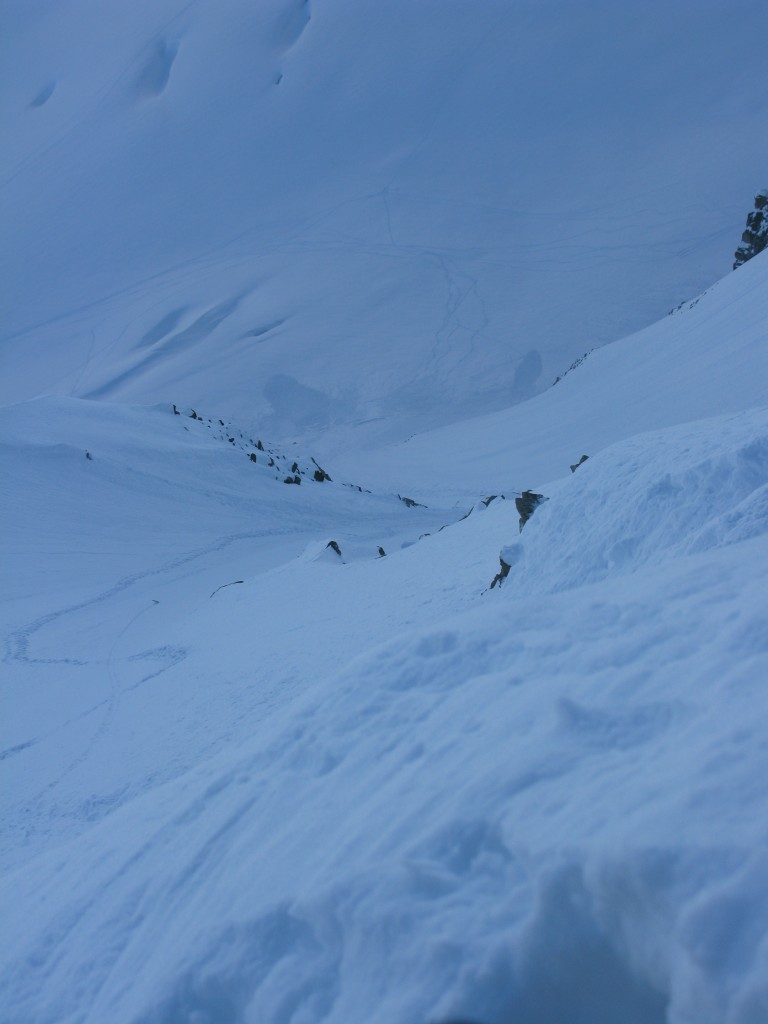 The story so far from the summit

And then we could start to enjoy some turns. 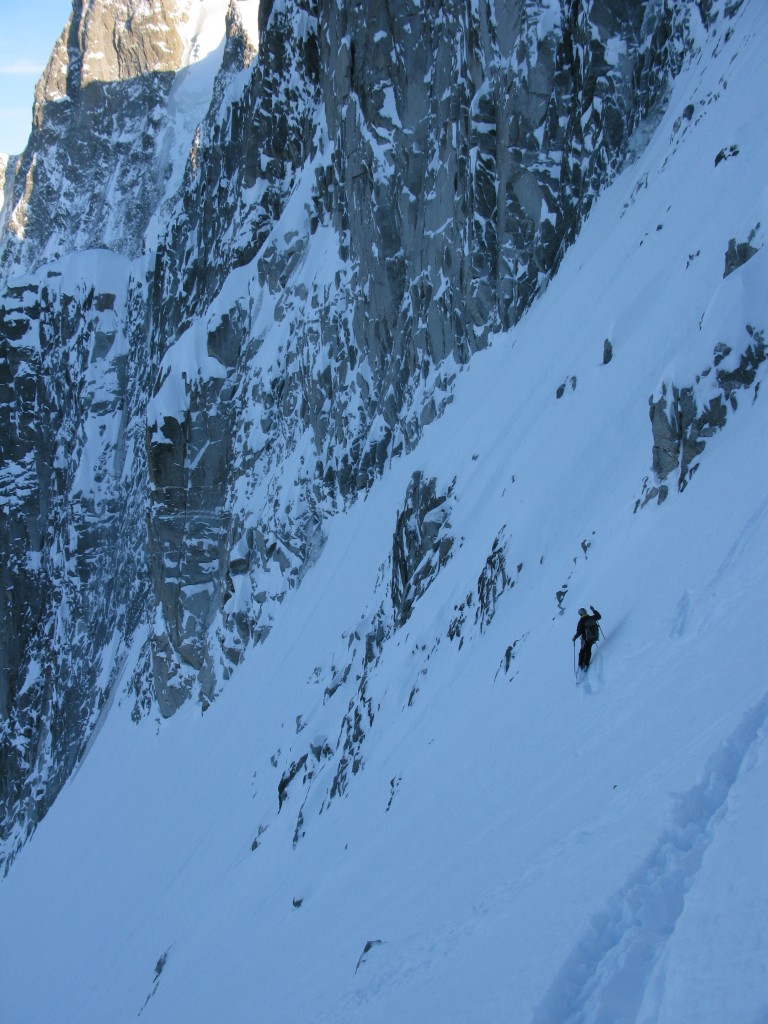 The snow had transformed with a bit of a sun crust on skier’s left so we headed down and across skier’s right and found some nice cold snow although the sun crust soon came back further down the face. It was a great line and everything came together nicely considering the last few attempts we’ve had in the mountains. 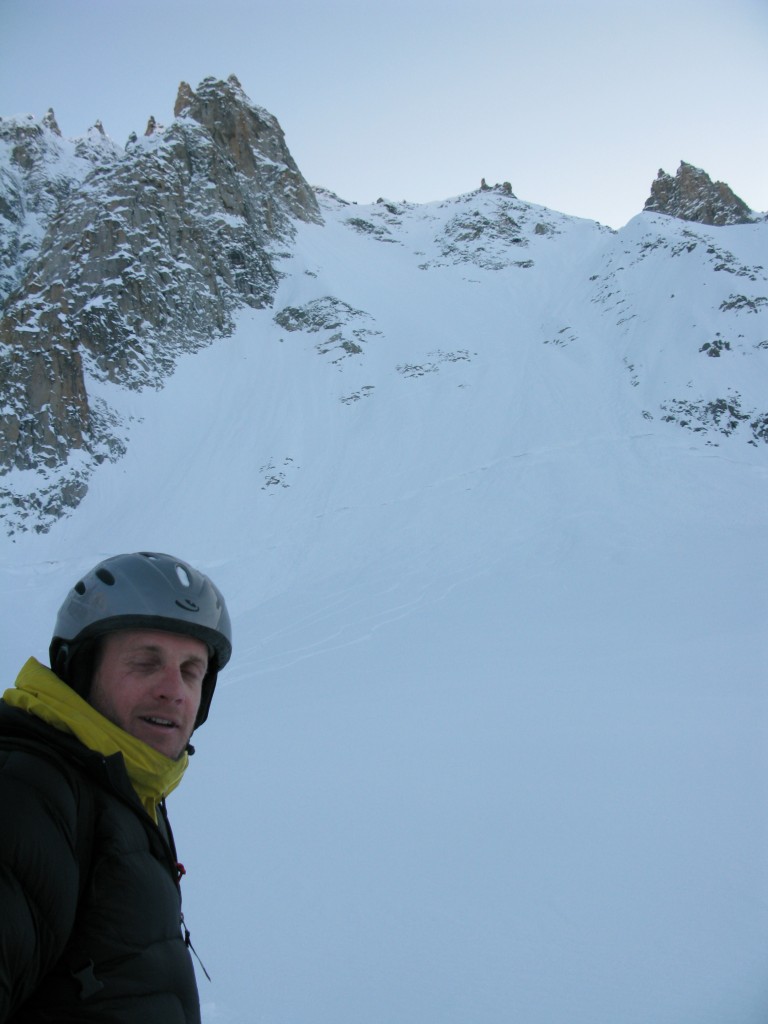 And just in time for some nice Alpenglow. 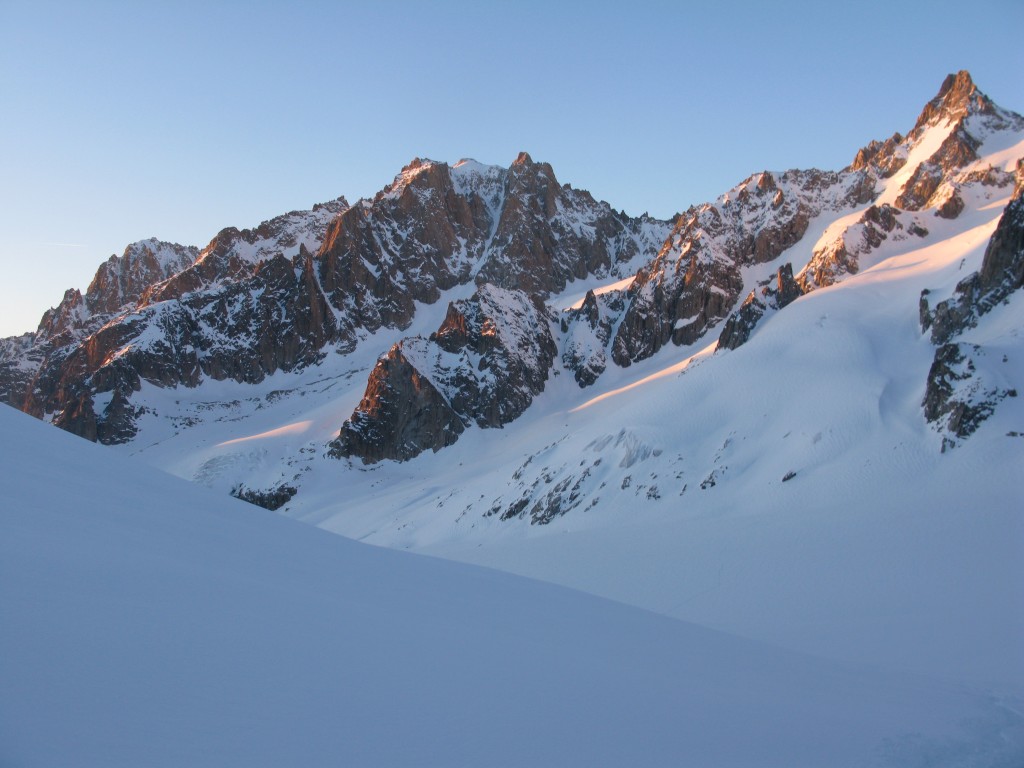 It ended up being a pretty long day…. Queuing at 7.30 for first lifts and getting to the Argentiere hut for 21.00. Vertical gain according to the guide book is 1050m.