We’ve finally got a little variation on the theme……… We went to bed and it was snowing and we woke up and it was snowing. What is going on? I don’t think it could really get much better than this in terms of new snow, rain affected old snow and avalanche. Just a little bit every day, settling nicely with every day that passes. Today, we had another 10 to 15cm.

Today was going to be a solo day and given the new snow I wanted to do something that was conservative and chose Hustinden which is a 5 minute drive from the house in Napp. Ski-in, ski out (well, almost). 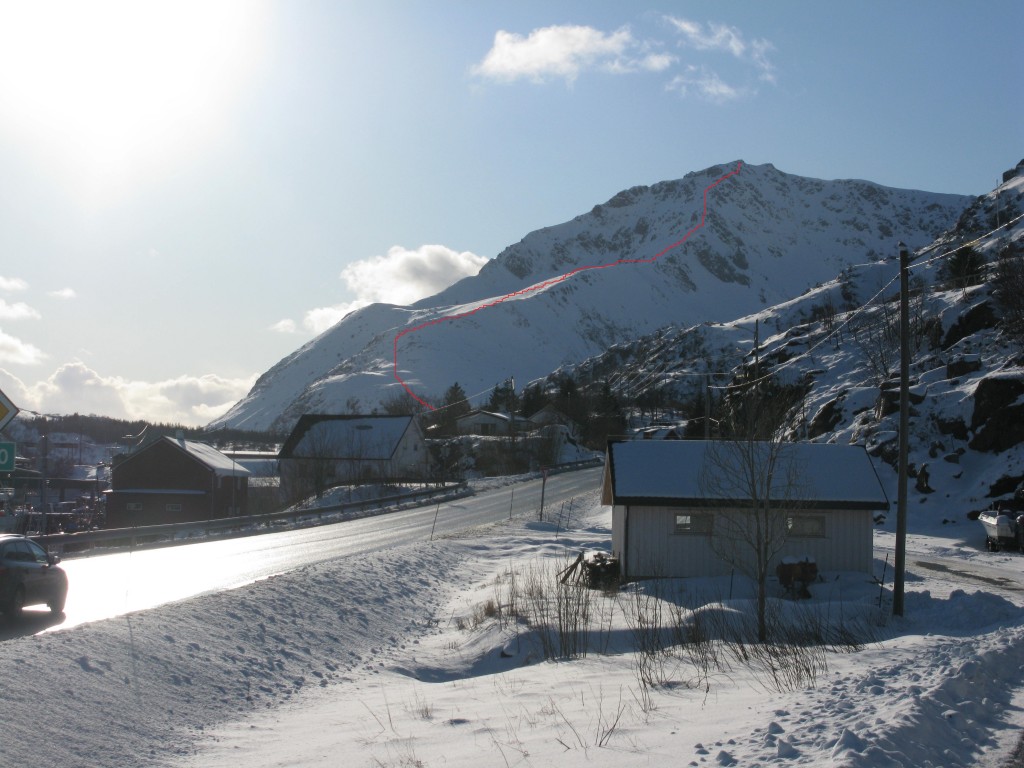 You have to drive to Nappskaret car park which is the same car park to go up Stornappstind. You’ll see it as soon as you arrive. This tour seems like a really good tour on those days you’re not sure of the snow pack as you’re nice and safe on the ridge the whole way, so if anything goes, it should go below you.

I had to cross a small river at the start which was easy and then skinned up the first section which is around 30 degrees and then it gets steeper to around 38 degrees (checked on inclinometer) and then mellows back down. Once I get to the steeper section, I boot packed up.

The whole trip is around 700m vertical gain from the car park. It took me about 2 hrs up and down which was a bit slow going. The wind was blowing almost perpendicular to the ridge, so there was a lot of deep wind transported snow on the leeward side, the side I boot packed up but more importantly also the side I boarded down

The snow was just below my knee for most of the way. Nice powder.

The snow seemed really cohesive on the lower angle stuff but as I gained elevation and started to climb up the steepest section towards the top (42 to 45 degrees, one section of 48 degrees for 10m (checked with inclinometer)), the snow was drier and I didn’t have a great feeling about it. I dug down to the old rain affected layer which was about 30cm below the new snow and it just seemed a little too light and fluffy for my liking. I could easily just wipe it off the rain affected layer. It just didn’t feel good enough which might have something to do with being solo.  Either way, I decided to turn about 50m below the summit and get out of there.

Being solo and having doubts is an endless battle. Are your doubts genuine or because you are alone. Very often it’s hard to tell the difference, I find. Wind, bad visibility and cold only add to the internal struggles ;).

The snow behaved normally but as the terrain was steeper, I was easily going through to the rain affected snow beneath which is food for thought for steep skiing later in the week.

So the trip achieved what I set out to do. Get some safe, powder turns and check out how things are shaping up. Hopefully, a little bit wiser this week. Things definitely need to bond a bit more on the higher elevations where the snow is drier.