I must have been to this mountain about 5 times now, this being the first time since I started this blog. It’s about a 2.5hr drive from Oslo and the closest decent mountain from Oslo I’m aware of.

It’s really easy to get to too which also makes it a pretty popular tour although there were only about four other guys on the mountain today. From Oslo, you just have to head towards Rjukan (a town with its own story to tell) and a few km before you get there, you turn off left and follow the road which takes you to the Gaustatoppen ski resort. As you start to get to the top, the road forks. Keep going straight on (not left) and after a few hundred metres you arrive at a gate blocking the road. The skin starts here and follows the road up a way until a few outhouses where you can pick you line to skin up. 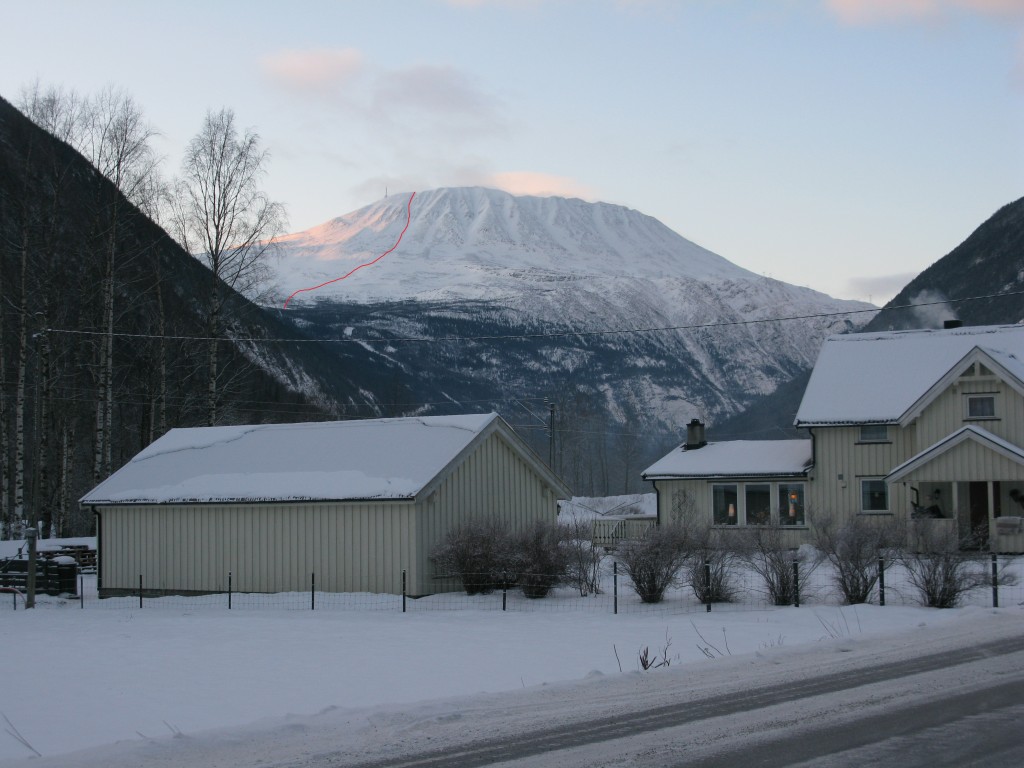 Gaustatoppen (1883m). Taken from the road before gaining altitude.

From the car, the vertical gain is around 950m and I was on the top in around 2 hrs. I had thought about lapping this one more time but that thought was put paid to halfway up and  confirmed on the way down. The snow was bullet!

I started slipping pretty badly on a few sections on the way up and had to bootpack up for a few hundred metres before putting the boards back on. The way down was not much better to be honest.

I thought I would try out the first obvious couloir from the big tower (you can just about see it on the picture). There is a bit of a convex role at the entrance and these always make me a bit nervous for avalanche no matter how stable things are, especially being solo. Absolutely nothing to worry about. It was bullet!  Maybe I should rephrase that. Not quiet bullet. You could make an impression in it if you punched it but my board didn’t leave very obvious tracks. It’s a pretty steep entrance. I’m guessing around 45 degrees but it soon mellows out to around 40 degrees and then keeps mellowing from there.

At least the surface of the snow in the couloir was smooth. I couldn’t say the same once I was out of the couloir. Sastrugi everywhere and this time it was bullet and icy with a couple of mm of powder. Not nice at all. Survival snowboarding really. I didn’t open it up until a joined the skin track on the way down and you cannot really open it up there anymore anyway as it so mellow.

I’m guessing the rain from Christmas time is still a major factor here. This mountain is quite exposed and any new snow is probably just being blown away at the moment. I should really have just boarded down the way I skinned up to be honest.

So….. not great snowboarding but a good day out in the pursuit of fitness.