God, this turned out to be a very long day. Up at 5.45am to get the first bin off the Aiguille du Midi with good friends, Greeny and Nick and down off the mountain at 1am.

The three of us had attempted to climb la Tour Ronde only a couple of weeks previously with the intent of skiing the west couloir (le Gervasutti) but there was just too much snow on the lower section and we got nowhere fast and had to abandon the route. It was probably a bit of a cocky move anyway and conditions really needed more time to settle. 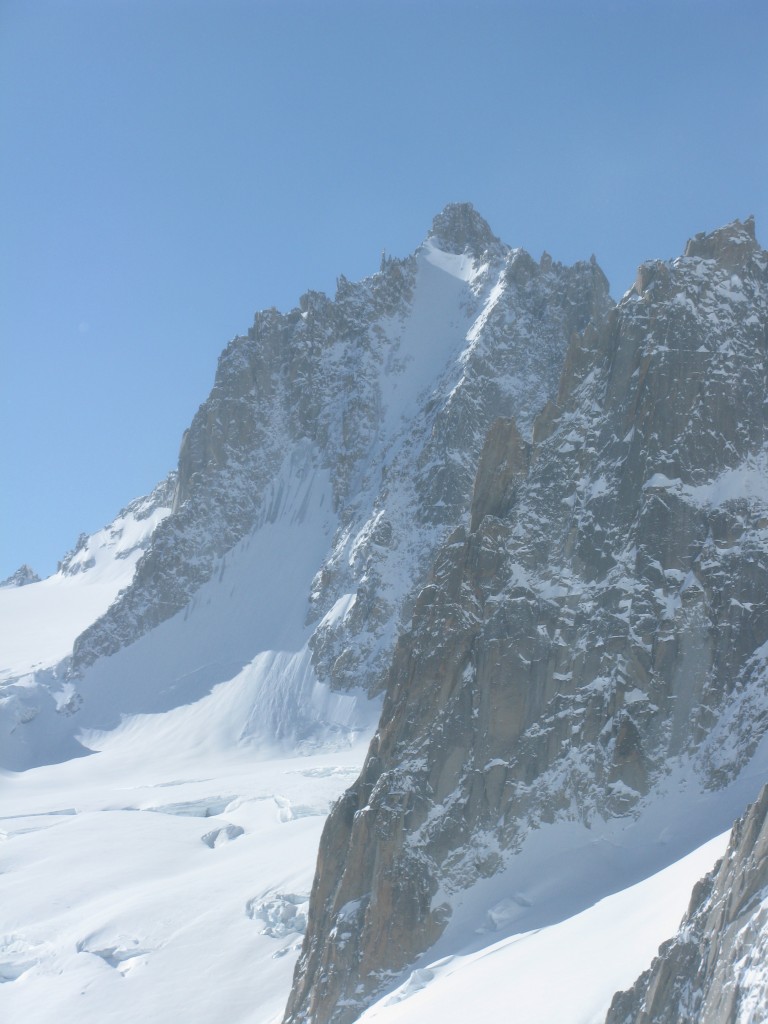 This time round, the weather forecast was a little on the dodgy side but then it had been for the last three days and each of those had been beautiful and blue bird, so we hoped the weather forecaster would get it wrong again. We got the first bin up at 8.10am  and were at the Bergschrund for 9.30 with lovely blue skies. So far so good! 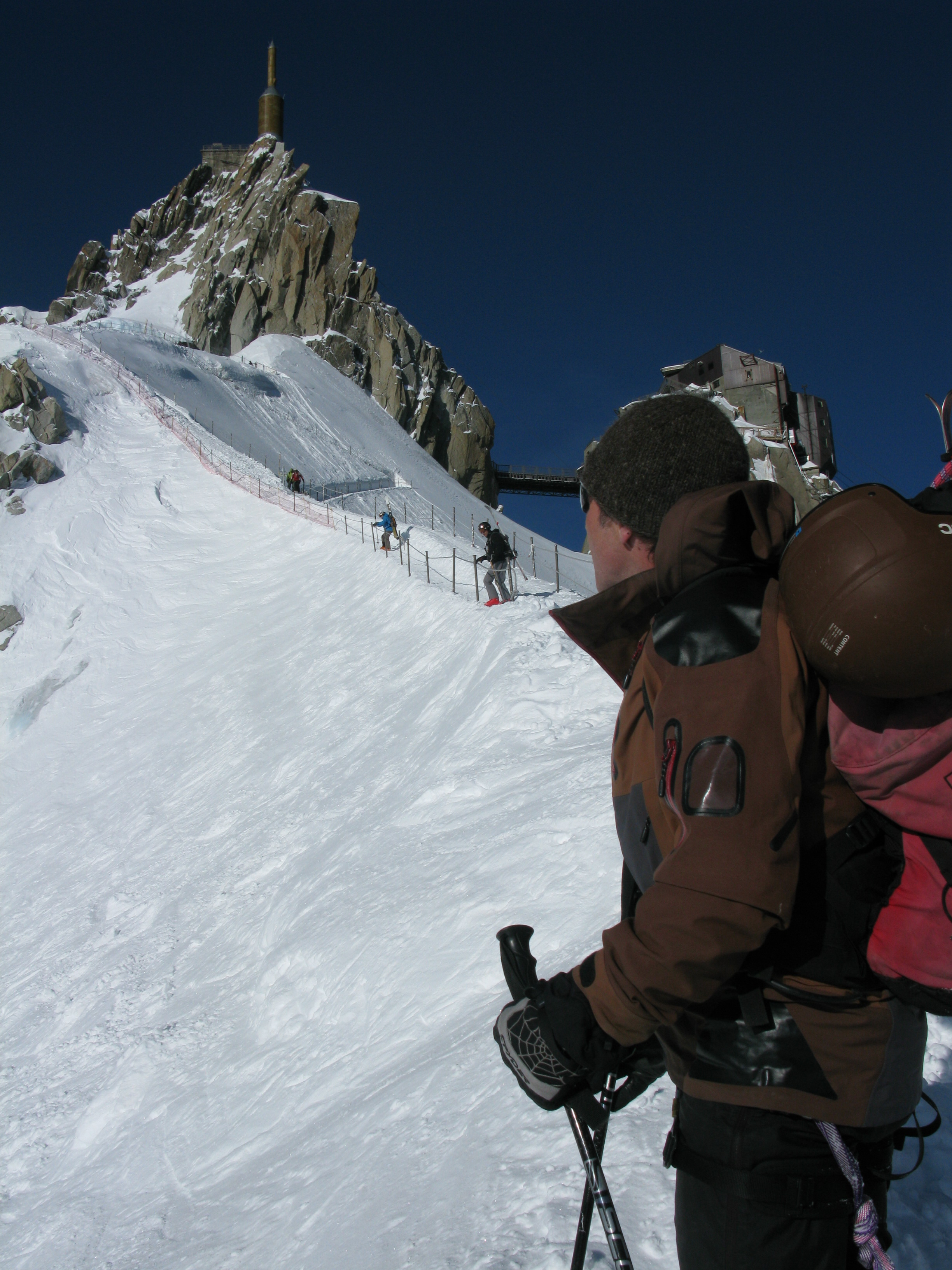 Greeny down the arete from the Aiguille du Midi. Look at the weather! 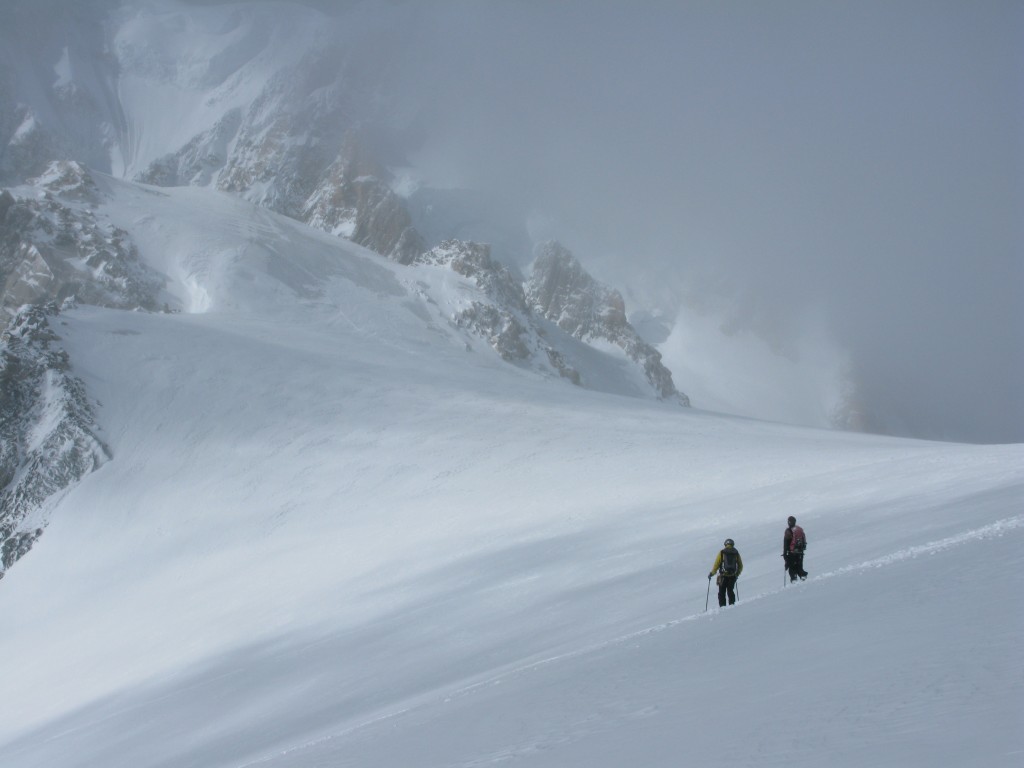 Greeny and Nick on the way to the Tour Ronde

As we were rounding Le Mont Blanc du Tacul, we could see that a group was already on the face and making their way up the ice chimney in the middle of the face. Great for us. There would be a boot pack in all the way! 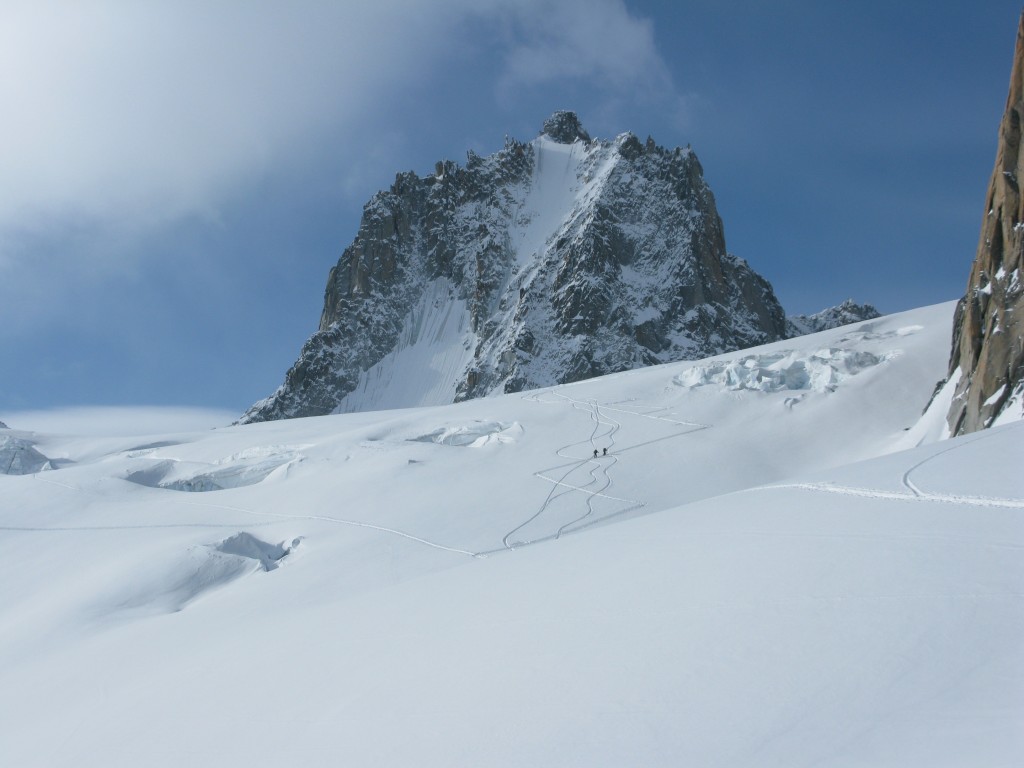 Start of the skin and la Tour Ronde

We made our way up the lower snow field slowly but deliberately. I was supposed to be down and meeting Seb in the Argentiere hut that night to ski something on the Argentiere basin the next day, so had a bit of a rocket up my arse. And the weather was closing in………

Soon it was snowing but it didn’t seem like there would be much accumulation but then the spindrift started ripping down the face. Cool, dry powder snow which got heavier and heavier as the day wore on. The actual ice pitch up the centre of the face is only 2 pitches of 60m. 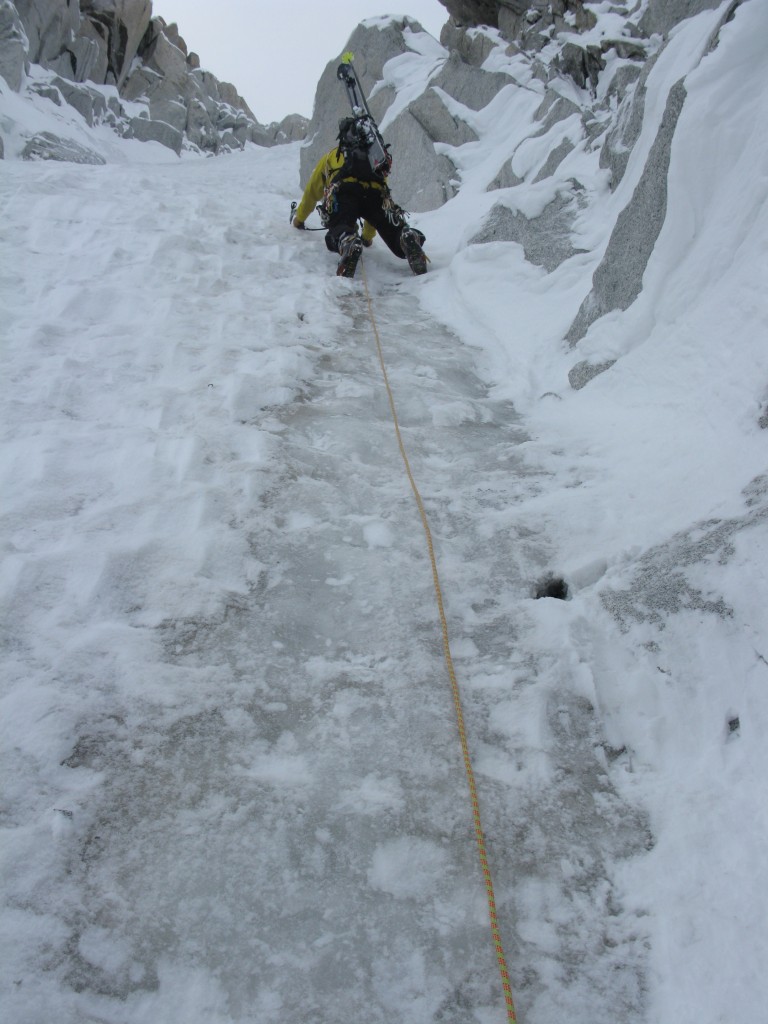 Nick on the first pitch

We simul. climbed up, with Nick climbing the first 60m till the rope went taught on me and I would start climbing and Greeny started climbing when my 60m went taught on him. I’m not sure what the ice grade is but it was probably not more than grade 4 (similar to the Chere couloir). The ice was good with only a few sections of plating.

By this time, the weather was really not looking too good and visibility was terrible. As Greeny topped out at the top of the ice chimney at around 14.45 with 100m left to climb, we decided the safest bet was to abseil back down and bin the route. The spindrift was coming down fast and furious now and one episode hit us with enough force to almost knock us of the face or so it felt (we were all safely on a belay point). 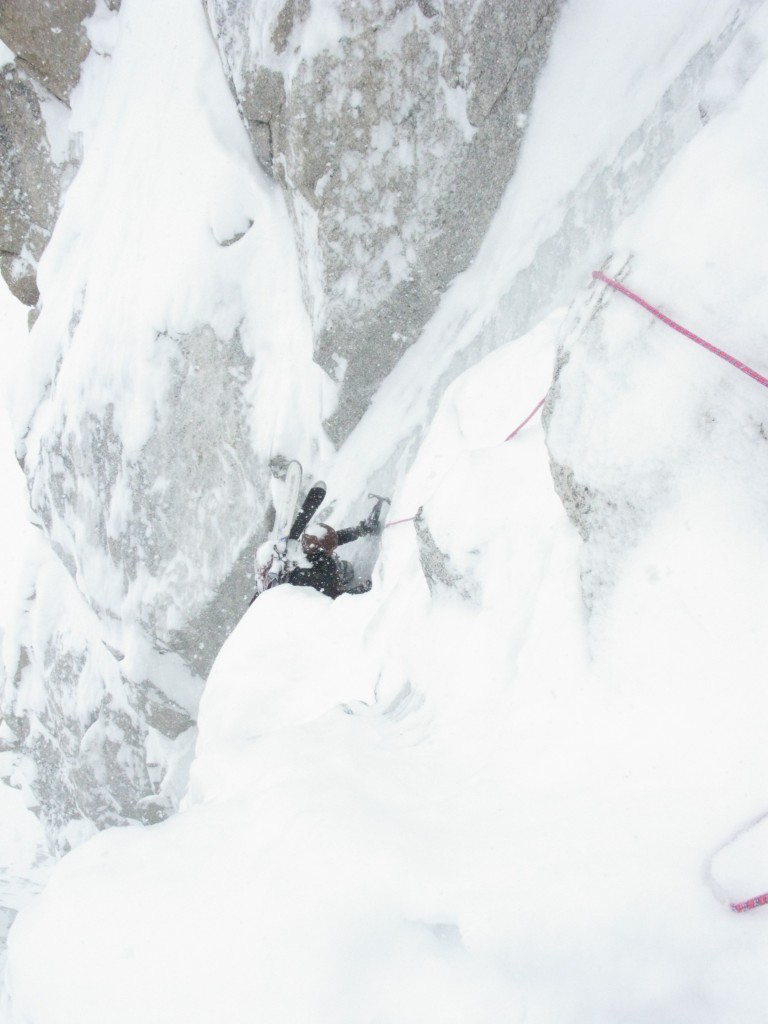 Greeny nearing the end of the second pitch

So, back down we went the way we had come up off a nice v-thread. Nick went down first to set up the next belay point, then Greeny and then me. Safely down to the next belay point and last abseil before the bottom snow field and the rope got stuck. We tried and tried and lost a lot of time trying to free the rope in vain, knowing deep down that the only way was to climb up again and free it which Nick ended up doing. Legend! A few moments of fearing for my frost bitten toes during the interlude and we were finally down to the bottom snow field by 19.00 and the board was on my feet. That was a nice feeling.

We skied the bottom snow field with poor visibility but the snow was deep, steep and cold and then started to worry about finding our way out in the white out. Fortunately, things improved the lower down we got. It was as if we had been sitting in a snow cloud all day on the Tour Ronde.

Down the Vallee Blanche we went, me skootching for about 1hr on flats having gone too far skier’s right, switching to ski mode and then losing one of the skis when I was about to put it back into board mode. It shot off and narrowly missed a crevasse, contouring round it. Greeny saved the day and went a retrieved it. What a day!

Thankfully, things went pretty smoothly thereafter and we skied/walked to the buvette with headtorches donned and then had to walk all the way back to Chamonix due to a lack of snow. Amazing bootbang and very tired.

By the way, there was a great little trailer to the upcoming film “Deeper” by Jeremy Jones with himself and Xavier de la Rue skiing this face. The top section wasn’t quite in condition when we were there but there’s some great footage of them riding from top to bottom. I’m just looking for it to link it but it seems to have been pulled. A real shame. Two of my favorite riders.

I’m now stuck in Chamonix trying to find ways to get home to Oslo. If anyone is heading that way, give me a shout!